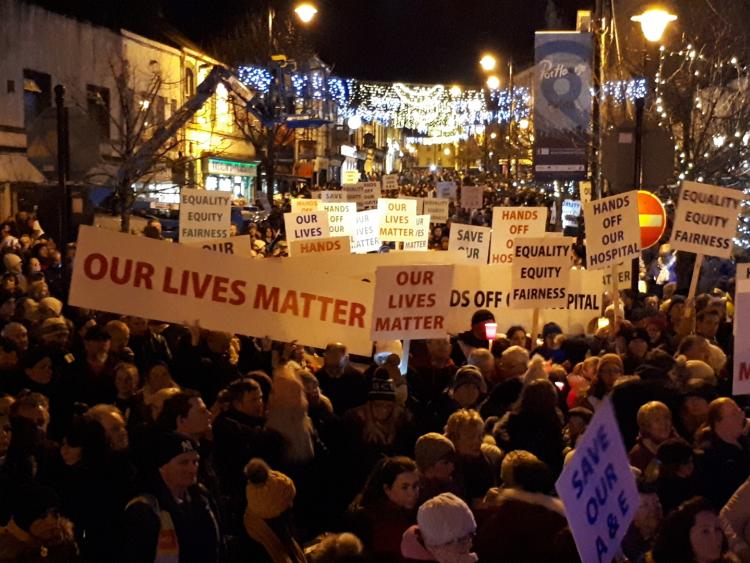 Hospital campaigners who fought unsuccessful campaigns against downgrade say they were 'codded' and services have worsened and become more difficult for patients to access.

The representatives from Clare, Monaghan and Sligo were speaking after a special report on PrimeTime. The Portlaoise Hospital Action Committee's secretary John Hanniffy said the proposal that downgrade is for patient safety reasons is 'nonsense'.

Minister for Health Simon Harris, none of his junior Ministers, nobody from the HSE or its Dublin Midlands Hospital Group would speak to RTÉ's PrimeTime about the downgrade of hospitals like Portlaoise.

None of the doctors who are national clinical leads and who back reconfiguration or any other medical expert would comment. The only person who spoke in favour of a downgrade was an Emergency Medicine consultant in Sligo. However, he conceded that Portlaoise has been allowed to 'wither on the vine'.

RTÉ PrimeTime reporter Robert Short visited Laois for the programme. He reported that plan for Portlaoise is much more radical than previous downgrades in that it will see A&E, maternity, paediatrics removed.

"This isn't just a story about Portlaoise hospital and its future. This is a story about the future delivery of hospital services throughout the country and that is why what happens here is very important," he reported.

He spoke with a family, a GP and attended the Light for Lives protest as well as a Portlaoise Hospital Action Committee public meeting in Mountrath.

He met with Anthony and Rose Maher and found out how the hospital has saved the life of their daughter Mary Claire who has a rare form of epilepsy.

Rose said a team of 15 staff are on standby in Portlaoise to provide life-saving treatment when their daughter has a seizure and arrives at the hospital to get help. This is apart from the paramedics that keep her alive in an ambulance. They believe their daughter would not survive if the paediatric service was relocated to Tullamore.

"There is no other facility for Mary Claire to go. She just wouldn't survive," said mum Rose.

"I'd like to ask these people to sit in the back of an ambulance with Mary Claire when she is not breathing on the road to Tullamore. It makes a big difference," said dad Anthony.

However, Emergency Medicine consultant in Sligo Hospital, Mr Fergal Hickey said the current situation in Portlaoise 'is not safe'.

"What is being proposed is to make the arrangments safe. Where you have a similar situation to Portlaoise, the same issues will arise. It may be a limited number of hospitals but ultimately if they were to get a safer service with a better-resourced ambulance service, brought to better staffed organised emergency departments with better facilities that would be better for all," he said.

He said the Irish health system is 'incredibly politicised'. He said the poor return on health spending was due to the configuration of services and political interference.

However, he said: "There is no doubt that the services in Portlaoise have been allowed to wither on the vine over time. That is not how service planning should take place".

Dr John Madden, Abbeyleix GP, said the key point for Portlaoise hospital is that it has a paediatric service and an obstetric service making it different to previous hospitals that were downgraded.

"But, if you remove one part of the service such as the Emergency Service the house of cards falls down. Centralisation involves risks to patient care and if you continue to suggest that patients can be transported from Portlaoise or other centres to larger urban centres on road networks that are already choked with traffic with an ambulance service that is unable to meet the demands that it is currently under in a national (health system) where there is simply no capacity for patients to be cared for in other hospitals," he said.

The programme did speak live to John Hanniffy of the Portlaoise Hospital Action Committee, Peadar McMahon of the Monaghan Community Alliance, Catriona McGoldrick of the Save Our Cancer Service Campaign in Sligo and Michael Guilfoyle a former Mayor of Ennis where a hospital was downgraded.

Ms McGoldrick said she 'felt sorrow' for the people who use Portlaoise hospital.

"Here we go dismantling another service that is working perfectly," she said.

She said the people of Dublin would not accept being asked to travel down to the Midlands for cancer care but people in her part of the country are now expected to make long journeys to Galway for care on top of a cancer diagnosis.

"There is not a hope that people on the east coast would travel to the Midlands for surgery or any kind of treatment but we are expected to do it. It's not good enough," she said.

Mr McMahon said that doctors and nurses could maintain skills to allow services be retained at smaller hospitals be working between hospitals as has happened with the Coombe Portlaoise partnership.

"There are other ways that this can be looked at without making the sickest people needing emergency treatment travel," he said.

He said it was never proven that Monaghan was unsafe. He said people were told they would get better services but they didn't.

"Now they are going to put the people of Portlaoise into bulging hospitals where there aren't enough nurses, doctors or beds," he said.

Former Mayor of Ennis Michael Guilfoyle unsuccessfully campaigned for services in Ennis which he said was 35 minutes from Limerick. He said people were misled when told they would get better services

"We were codded. That is the only word I could use and the people of Portlaoise are going to be . Our TDs are the ones who will decide but it is amazing how that, when they hit the Naas dual carriageway they tend to forget the promises back behind them, that they actually break them when they get to Leinster House," he said.

He said 15,000 people marched in Ennis and the TDs gave the public many commitments about what they were going to deliver.

Mr Guilfoyle insisted that politicians should be making decisions about healthcare but the public is not getting value for money.

"If you were to go into Limerick hospital you would get a chair quicker than you would a bed and you could be left in a corridor for 24 hours and they tell us this is the hospital of excellence,"

John Hanniffy said Portlaoise hospital had been consistently underfunded which was the actual problem. He said the link up with the Coombe is working well and the A&E is working "absolutely ".

He said the hospital is one of the busiest in the region but the budget is €51 million compared with Kilkenny which has a smaller catchment but gets €74 million and Tullamore which as €96 million.

He said the downgrade is based on making budgets and private medicine.

"The idea that this is about patient safety is a nonsense. This is about budgets. This is about where money is spent and where consultants have their private and their public patients mix," he said.

He said it should not become politically impossible to save the service if Charlie Flanagan loses his seat at the cabinet table.

"The bottom line is that what the HSE is proposing is absolutely wrong. The report is fundamentally flawed in its construction from the start. Ultimately this will be a political decision but we live in a country that is a democracy. We do not live in a city. This is not Manchester or Birmingham and everybody is an hour on a motorway from an A&E," he said.

Mr Hanniffy said people are not going to be led down the same road as other communities.

"We are not going to be . We can see what is happening. The people of this country are fed up with their post offices, banks and garda stations being taken away. They are not now going to take away our healthcare on this spurious argument that people are going to be safer.

"You are not safer if you are transferred into a hospital that is already overcrowded, that didn't have a consultant on call and you can't get into the car park and you are going to be left on a trolley. Mortality rates on trollies are higher than the mortality rates on hospital beds. We have fully functioning hospital and we intended to keep a fully functioning hospital," he said.