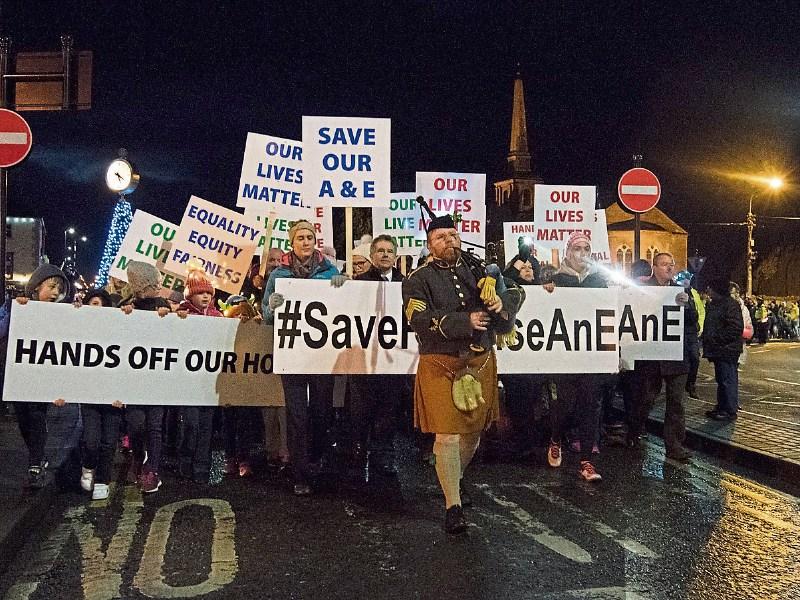 The people of Laois, and beyond, sent a clear and unequivocal message to the powers that be last Saturday evening, when they turned out in their thousands to protest over the proposed downgrade of services at Portlaoise Hospital.

Any lingering or residual doubt that might have existed about the public's attitude towards the hospital were resolutely crushed in the flow of people on all approach roads to Main Street on a dark December evening.

The series of speeches that rang out from Lower Main Street retread the by now familiar ground of why Portlaoise Hospital should be saved, and indeed upgraded.

However, in many ways Saturday's protest belonged to the people who spoke en masse in a gathering not seen locally for many a year.

It affirmed Portlaoise hospital's place as part of the fabric of the local community.

The venting of public support for the hospital was always a necessary measure, and this may not prove to be the last.

The focus now moves to the political with a meeting scheduled between the Minister for Health, Simon Harrish and Government Minister and TDs for this week.

The mood music emanating from all this is hardly encouraging.

We are faced with the apparently dogged determination of the HSE and the Dublin Midlands Hospital Group to implement their plan for the region, which sees Portlaoise downgraded.

As stated here and elsewhere before, their arguments for doing so are wrong and flawed, not taking into account factors such as Portlaoise's strategic location.

And there is no mistaking the fact that lives are at risk if this plan does become reality.

This is not some paper exercise which can be explained away or justified through jargon or lofty sounding bureaucratic waffle which makes much of complexity and integrated plans.

A downgrade will leave Portlaoise hospital bereft, purely and simply

It will impact on people in crucial life and death situations, and more often than not this will apply to elderly people.

A downgrade is wrong.

The people of Laois have cleary demonstrated the depth of their feeling.

The question now is will they be listened to.