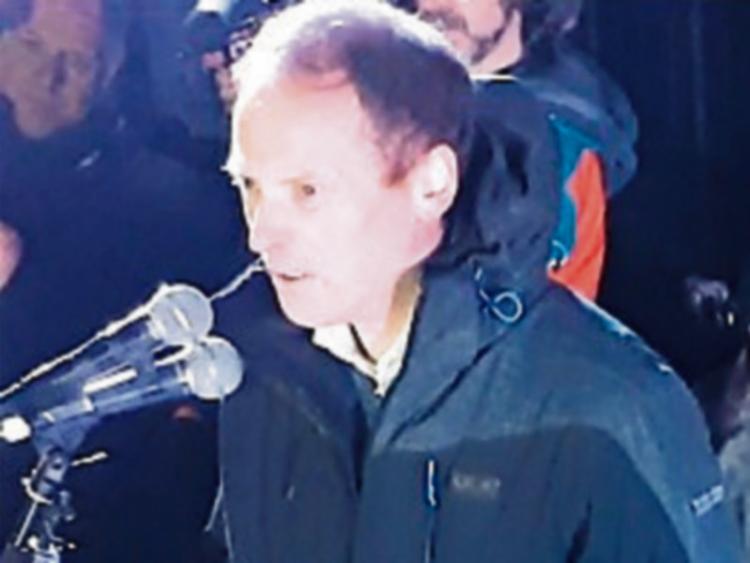 It’s been a privilege and a joy to work at MRH Portlaoise. I’m proud of the work we do.

Thank you to the people who have turned out to support our local hospital. Your voice must be heard. Thank you to our local politicians, to the hospital action committee, and I’d also like to acknowledge the work of journalists in this town who’ve taken the time to explore and understand these complex issues.

We have seen in recent weeks a draft of a plan for downgrade of services at MRH Portlaoise leaked to the national media. We reject this draft plan, the manner in which it has been released and the manner in which it was put together. It was drawn up without consultation. People in this community carry the risks and the burdens of this proposed downgrade. Our concerns need to be heard and our voices as a community must impact on planning for our healthcare. In drawing up this draft there was no attempt whatsoever to consult with local people or local stakeholders. We all in truth were actively excluded from consultation. This is simply wrong.

This process has produced a draft plan that we reject because we fear it will, if implemented, worsen access to acute healthcare. There is a crisis of capacity at MRH Portlaoise. This crisis is not unique to Portlaoise. We consistently see large numbers of people waiting on trolleys for admission at Tullamore, Naas and Tallaght hospitals.

The problem is not that there is too much healthcare in the Midlands, the problem is that there is too little. There are too few hospital beds, too few healthcare professionals and critically too few ambulances. The draft plan will cutback on the number of acute beds in this area. The result is chilling and obvious. We’ve seen the effects in the Mid-West and in the NorthEast.

There, much smaller units than Portlaoise were downgraded, units additionally that did not have paediatric or obstetric services. We now see the result of this policy in overcrowding at Limerick and Drogheda.

The draft plan fails to make provision for people who are currently looked after in Portlaoise to be looked after elsewhere. There is no new money in this plan. The projects included in the plan are pre-existing proposals in the pipeline to tackle existing infrastructure deficiencies at particular hospitals. The predictable consequence of this draft is dangerous overcrowding. Patients will end up travelling to join queues in already overcrowded units. This draft is a blueprint for disaster for healthcare throughout the whole region.

The DMHG will tell us that however hard, this cutback is necessary because services in MRH Portlaoise in their view are unsustainable and in their view this problem is irresolvable.

Services in Portlaoise are under-resourced. They are under-resourced because they have suffered from years of under-investment. We cannot now roll-over and accept that because the State has failed to resource healthcare in Portlaoise in the past it can now absolve itself of the responsibility to do so in the future. Such thinking is in essence a policy to increase inequality in healthcare provision. It is fundamentally unjust, it suggests that those with least should get even less.

They claim though that correcting this underinvestment would not secure the future of services at MRH Portlaoise. Services would still be unsustainable because of low volumes in certain areas. In particular they talk about the critical care unit. The critical care service is like the goalkeeper in the hospital team.

A good team may not need the goalkeeper too often but no team can go on the pitch without one. The DMHG is clear that the unit in MRH Portlaoise is safe but maintain that it cannot be sustained in the longterm and for this reason it must be closed. With it, though, goes A&E, Acute Medicine, Surgery, Obstetrics and Paediatrics. They say there is no other option. They say that this must happen. It is irresolvable.

We disagree. We have examined this problem closely. We can see that it is not unique to Portlaoise and very many hospitals share this same issue.

We believe the answer to this issue can be found in the networked model of care in place between the Coombe and MRH Portlaoise. Using this model as a template, we have in conjunction with our GP colleagues designed a proposal we believe can sustain critical care at MRH Portlaoise.

This model is a better, safer, more effective, more realistic and more just solution that the one put forward by the DMHG. We have in the last week costed this proposal and shared it with the Department of Health.

We, to be clear, are not about the status quo. We are not afraid of change. We welcome it. Our plan is grounded in equality, in the belief that patients here deserve care on the same footing as anyone who presents to hospital anywhere in this State.

People here are not looking for special treatment. We are looking for no more than our fair share. We believe however, that the DMHG plan will make things worse.

We call on the Minister to reject the DMHG plan.

We believe that our plan

is better, fairer, more realistic and will provide effective and safe care for people relying on MRH Portlaoise, now and into the future.