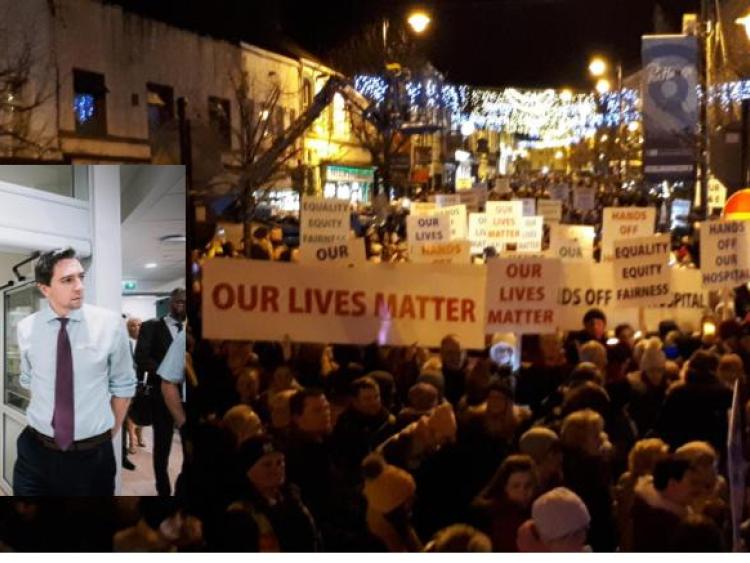 A week after several thousand people marched against the downgrade of Portlaoise hospital, a meeting on the future of the Laois hospital between the Minister for Health Simon Harris and the three Laois TDs is now scheduled.

Laois TD and Minister for Justice Charlie Flanagan said he had raised the issue with his cabinet colleague on a number of occasions since the Light for Lives rally in Portlaoise on December 2.

Minister Flanagan told the Light for Lives rally that a meeting would take place where all TDs would make the case against the downgrade of the hospital to the Minister.

Speaking to the Leinster Express in Templemore at the Scott Medal presentation to Laois Offaly Gardaí, Minister Flanagan confirmed that a meeting had now been scheduled. He said it is fixed for next Wednesday, December 13.

"I met Simon Harris regarding MRHP on Monday and I spoke to him again on Tuesday with further updated information to assist in the decision making," said Minister Flanagan.

It is not clear if the meeting will take before or after a promised announcement by Minister Harris on what he intends to do with the third draft of downgrade plan for the hospital. He has indicated that he would have to make a statement on the process which began in 2015.

Given the political implications, it is likely the the hospital would have to be discussed at Government with Taoiseach Leo Varadkar before a decision is reached. Minister Harris was given the first draft of the downgrade plan in December 2016.

Laois opposition TDs, Sean Fleming and Brian Stanley, said they made written and verbal requests to the Minister for meetings since the march. Both said they spoke with Minister Harris in person in Leinster House.

They said Minister Harris indicated that he did wish to address the matter by Christmas.

The Leinster Express asked the Department of Health if Minister Harris intended to meet the Laois TDs this week as was announced at the public meeting in Portlaoise last Saturday, December 2. There was not reply.

The HSE's Dublin Midland's hospital Group plan for Portlaoise envisages the removal of A&E, ICU, maternity, paediatrics and most surgery. The hospital would get a 24 hour Medical Assessment Unit and Local Injuries unit instead of A&E. The rest of the hospital's activity would be refocused on outpatients and elective work.

The Dublin Midlands Hospital Group wanted to begin implementation in January 2017. It aimed to be ready to move most services by 2022 except A&E which would be scaled back before then. The cost would be over €100 million with money spent in Portlaoise, Tallaght, Tullamore, Naas and the Coombe hospitals to facilitate downgrade.

No money has been committed to the project by the Government or the Minister for Health has the power to reject this plan.

The Portlaoise Hospital Action Committee plan to run a candidate in the next General Election if the Minister backs downgrade.