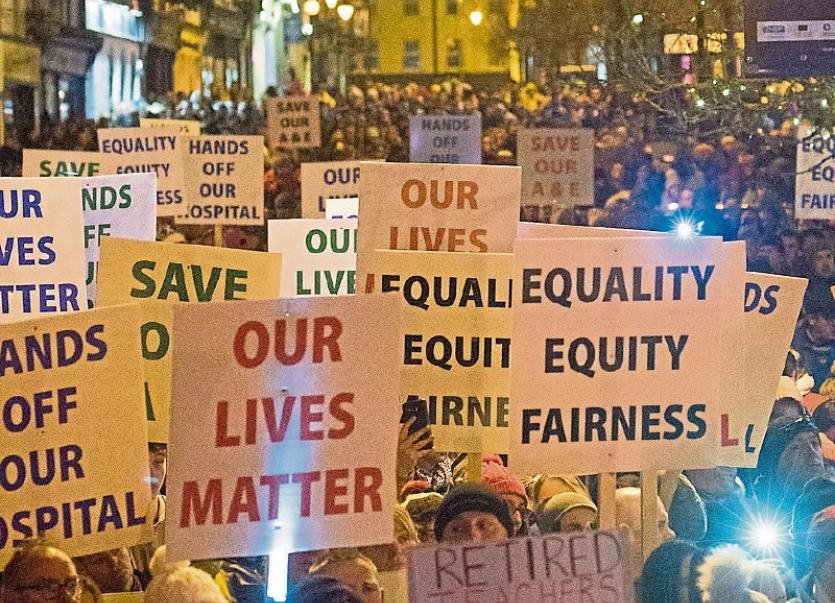 Thousands marched in the Light for Lives anti-downgrade protest in Portlaoise.

The Minister for Health has declined to rule out the closure of the Emergency Department at Portlaoise hospital by December 2018 but does intend to 'provide clarity' on the future by the end of 2017.

Speaking on RTÉ's Morning Ireland, Minister Simon Harris was asked by presenter Gavin Jennings if "the emergency department at Portlaoise hospital will be open this year?"

"I have already said I am going to bring clarity to Portlaoise by the end of the year. That's still my intention. Even under the report submitted by the HSE, which has been leaked on many occasions, even under that report it envisages services to continuing for many years.

Asked again if the A&E would be open this time next year, the Minister replied: "You're asking me my intentions today. I am still engaging with my department in relation to the issue.

"I think there is very serious questions about capacity in the health service. We now have Sáinte Care (cross party plan for the health service). I'm not sure the withdrawal of services pending that make sense, but what I will do for the people of Portlaoise is provide clarity in the coming weeks by the end of the year on my intentions for their hospital." he said.

Minister Harris was interviewed on Wednesday, December 13 on the same day he was due to meet Laois TDs Minister Charlie Flanagan, Sean Fleming and Brian Stanley on the issue.

Listen back to the interview here

The Minister was given a downgrade plan for Portlaoise at the end of 2016 by the HSE's Dublin Midland's Hospital Group. It recommended the withdrawal of A&E, ICU, maternity, paediatrics and most surgery from the hospital.

The HSE wanted to begin implementation of the the plan in January 2017 and be ready to withdraw services by 2022. A&E would be scaled back before then.

A €100 million plan was envisaged to allow reconfiguration of services in Tullamore, Tallaght, The Coombe, Naas hospitals to  facilitate downgrade.

The plan is the result of the HIQA investigation into Portlaoise hospital. It called for a plan and questioned the susatainability of services in Portlaoise. This week it was reported that HIQA could get the power to close hospitals by withdrawing licences.