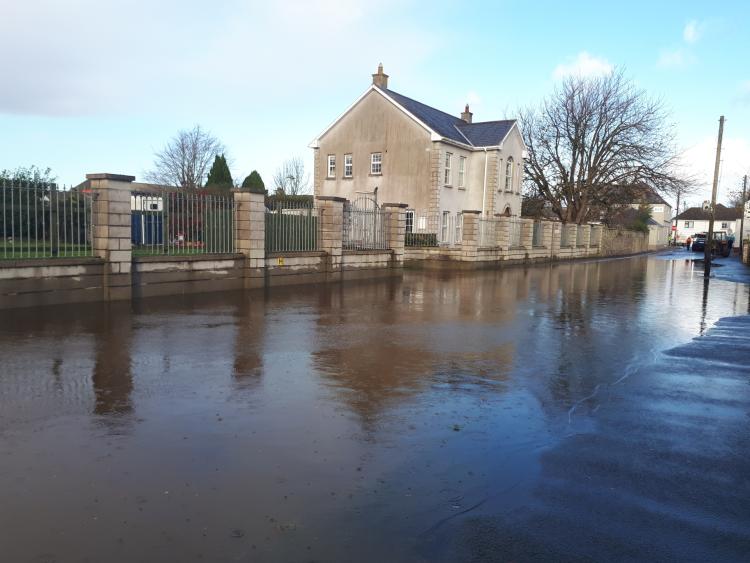 Manor Road in Mountmellick was badly hit by flooding on November 22.

There is a ‘monster of a tree’ currently blocking the flow on the Cloncannon River in Mountmellick according to Cllr Paddy Bracken.

Cllr Bracken called for urgency in Laois County Council’s handling of flooding in Mountmellick at the recent Mountmellick/Borris-in-Ossory Municipal District meeting on December 14.

He said there is a large tree blocking the river in Cloncannon which is a rural area just outside Mountmellick between Rosenallis and Ballyfin.

He said that if there is one heavy rainfall this weekend which he thinks could be in the forecast, Mountmellick could be facing more flooding in the near future.

“We have to take on board the consequences for human beings, people have suffered and will suffer again.

"There won't be a house insured in Mountmellick in 2018, those who claim will never have insurance again and the local area plan in Mountmellick you can draw a red line around it. It is a no-go area. Not one house will be built in Mountmellick," he said.

Laois County Council said that is it working ‘with all stakeholders’ in establishing the next move in terms of carrying out drainage works at the River Barrow, Owenass and Clodaigh.

The ‘stakeholders’ mentioned in terms of the rivers are the Office of Public Works (OPW), the National Parks & Wildlife Service and the private landowners.

Senior Engineer at Laois County Council, Paul McLoughlin said that a meeting will be held with the National Parks & Wildlife Service before Christmas to discuss the drainage work that needs to be carried out in the rivers in Laois.

Cllr Bracken called on Laois County Council to “cut the red tape” and reminded the local authority what the people of Mountmellick and surrounding areas have endured over the last three weeks.

He asked for urgency and temporary flood measures to be put in place while long term plans are drawn up.

Cllr John King agreed and said “wildlife has to go out the window”.

“You can have all the rules you like, people’s lives in towns and villages have been destroyed,” he said.

Cllr David Goodwin said that there should be no problem asking Minister Charlie Flanagan to assist with funding to carry out flood relief measures.

"It is a matter of prioritisation and there is no point securing funding if we don't have permission to do the bloody job. There is no use having money to pay consultants to do surveys that are never dealt with. I was on the Barrow Drainage Board and my father before me since 1950's and it is survey after survey," he said.

Chief Executive of Laois County Council, John Mulholland, has written to the OPW to establish the current status of the flood relief measures under Catchment Flood Risk Assessment and Management (CFRAM) for Mountmellick.

Cllr Bracken asked for clarity on the €2 million that was announced for flood relief measures.

Director of Services, Mr. Donal Brennan said that he will seek clarity on the €2 million.

On November 28, it was announced that a fund worth €2 million was approved to help clubs, organisations and small businesses hit by the floods that caused extensive damage.

Read the full story on the €2 million here.