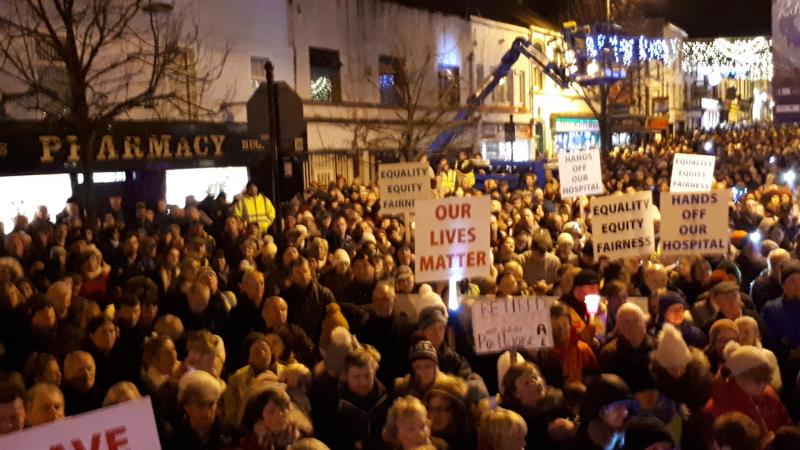 Anti-downgrade campaigners in Laois have rejected a HSE hospital management claim that a strategy for Portlaoise and other hospitals is not related to a plan to strip services away.

In a statement, the DMHG stated that the launch and the Strategic Plan does not relate to the proposed Portlaoise Hospital Action Plan which outlines extensive downgrade.

Neither document has the green light from the Minister for Health who, under the law, must sanction any downgrade before the HSE can proceed.

The Portlaoise Hospital Action Committee argue that the leaked strategic plan clearly outlines on page forty that the Emergency Department would be downgraded. It states: “we will develop a 24 7 general practitioner referred medical assessment unit and a 12-7 local injuries unit in the Midland Regional Hospital Portlaoise”.

Committee Chair, Thomas Timmons could not comprehend the DMHG's stance.

“I cannot fathom how they can claim that this does not relate to Portlaoise Hospital when it is there in black and white!”

Committee secretary, John Hanniffy said no document should be published.

"Any launch of any document, be it strategy or report is wholly inappropriate until such time as Minister Simon Harris has provided the promised clarity on the future of Portlaoise Hospital”

Committee PRO, Eimear Holland maintained publication of the strategy would be the start of something worse.

“This launch is the thin end of the wedge. Until we are informed that the launch has been cancelled, we fully intend to protest at Trinity Bio-medical Sciences Institute on Thursday,” she said.

The Minister declined to comment but the DMHG said he would not be at the launch.