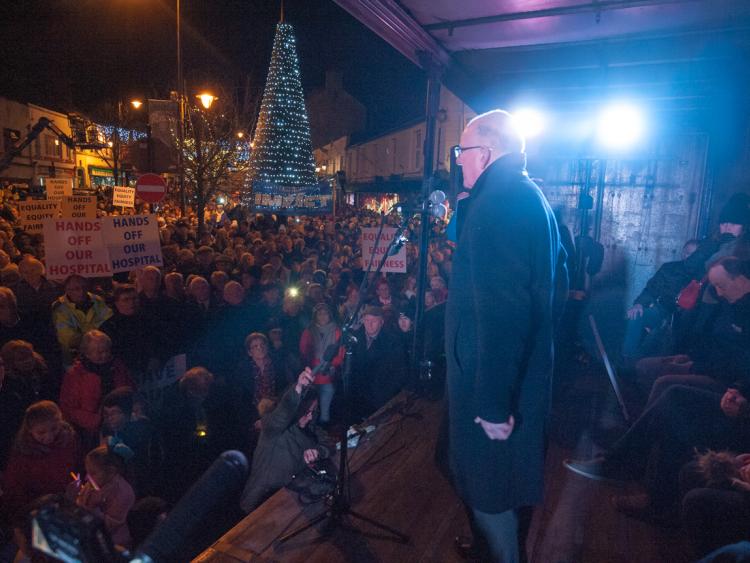 Laois TD and Minister for Justice Charlie Flanagan believes his colleague Simon Harris has stopped an 'ill-advised and flawed' downgrade process by embarking on a public consultation process on the future of Portlaoise hospital.

While the Minister for Health has not scrapped the HSE's Dublin Midlands Hospital Group plan, his Laois colleague believes it downgrade has been halted.

"I am very pleased that Simon Harris has stopped this train. It was ill-advised and fundamentally flawed. He has ordered a consultation process to be run by the Department of Health and not this HSE. That is important.

"He is committed to meeting the doctors again which is a restatement of a commitment he gave when he met them last April.

"We now have a consultation process which was refused by the HSE. It is an opportunity for local medics, doctors and nurses, local public representatives and the Portlaoise Hospital Action Committee to have their voices heard.

"I always maintained that this would been done better through dialogue than street protest," he said.

Minister Flanagan said the alternative plan drawn up by doctors which, he said came about at his instigation, is "very much on the table".

Laois Sinn Féin TD Brian Stanley said the consultation should not be used as a fudge. Minister Flanagan agreed and said the HSE must plan for the hospital to be 'busy' and not downgraded.

"I don't want a period of uncertainty. Ultimately what we need is a busy regional hospital that will meet the needs of the people of the midlands," he said.

Minister Flanagan said a new Dublin Midlands Hospital Group board will be appointed in the New Year the groups chief executive Dr Susan O'Reilly will also have departed the scene.

"If the HSE had to act in accordance with their mission statement the controversy of the last year could have been avoided," he said.

The Portlaoise Hospital Action Committee have welcomed the consultation process.

Laois Fianna Fail TD Sean Fleming said his party leader Micheál Martin was shocked to learn of the lack of consultation when he met the action committee and doctors today.

Under the HSE /DMHG plan, Portlaoise hospital was due to be radically reconfigured. A&E, ICU, maternity, paediatrics were all due to be removed. The DMHG want to downgrade the hospital to Category 2 hospital with a focus on day care.

The hospital campaign group had threatened to protest in Dublin this week where the DMHG planned to launch a linked strategy for seven hospitals. It outlined in summary the removal of 24/7 emergency care from Portlaoise.

It is understood that this was called off after the Minister for Health intervened. The DMHG says it still intends to launch the strategy in 2018.