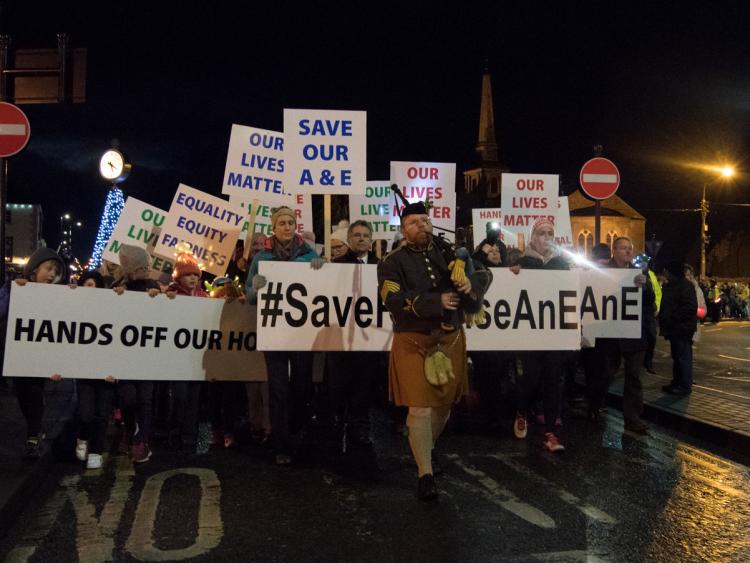 Portlaoise hospital campaigners and Laois doctors hope to get broad political support after 'positive' talks with the leader of Fianna Fáil Micheál Martin.

Laois Fianna Fáil TD Sean Fleming was also present. He said afterwards that Mr Martin was shocked at the lack of consultation on the downgrade plan that aims to remove maternity, paediatrics, A&E, ICU and most surgery from the Midland Regional Hospital Portlaoise.

Mr Martin is the first party leader who has accepted an invitation to meet. The committee said this was a very helpful and supportive meeting. Secretary John Hanniffy described the meeting

“We felt very positive coming out of this meeting. It was very much a two-way discussion. There was much consensus in the room. He also listened with great interest to the local clinician’s alternative plan for Portlaoise Hospital and communicated his satisfaction with them in principle,” he said.

Dr Sean Montague welcomed the chance to have a voice.

“We were very grateful to Deputy Martin and Deputy Fleming for taking the time to meet us. I would like to thank them for their courtesy and time. I felt that our concerns were listened to, and very useful advice was given.

"Deputy Martin has committed to discussing the issue with Minister Harris in the New Year. We would like to reiterate the fact that Portlaoise Hospital has functioned under the cloud of uncertainty for too long. Whilst the process must be appropriate, it should not be delayed causing further ambiguity for the people and medical staff,” he said.

Dr Fleming said the Mr Martin was told that upgrade was needed not downgrade.

“We stressed the clinical and demographic need for the hospital to be upgraded and pointed out the extreme lack of proper consultation from the HSE thus far. We requested as much support from the Fianna Fáil parliamentary party as possible, and we discussed the wider context of support for the smaller hospital countrywide.

"We also discussed the overall lack of capacity in the hospital system, and why it seemed so senseless to consider a downgrade in those circumstances,” he said.

In a statement issued afterwards, the committee thanked Mr Martin for accepting the invitation to meet.

"We would also like to thanks Sean Fleming (TD) for his engagement and his efforts to facilitate this meeting. Finally, we would call on other political party members to raise awareness of the issue of re-configuration in the health service. It is bigger and wider than Midland Regional Hospital Portlaoise. It is a national concern and should be met with great critique before it is too late," he said.

The statement was issued on the same day as the Minster for Health Simon Harris announced that there would be consultation on the future of Portlaoise hospital with the public and local clinicians.