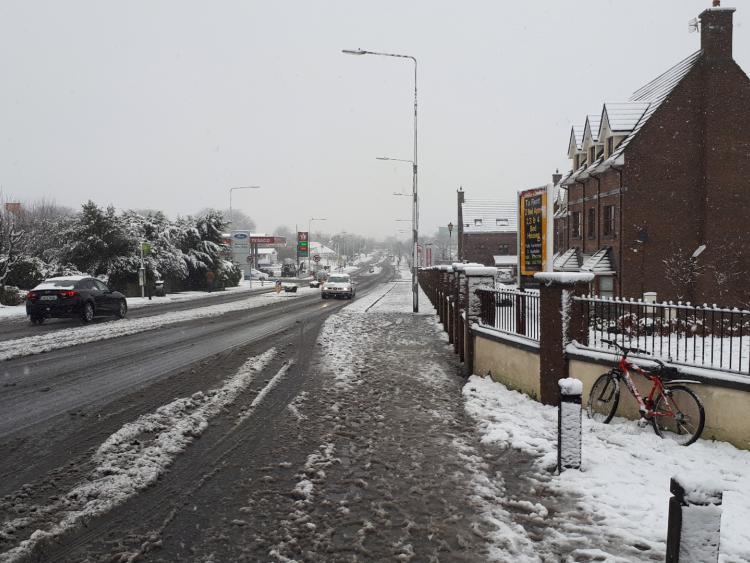 Dublin Rd Portlaoise -Snow could blanket Laois for the second time in a month.

The Status Yellow warning was extended to the whole country at 9pm on Wednesday by Met Eireann.

Temperatures could drop to minus 4 degrees overnight.

Some showers of snow are also likely.

The warning is valid to Thursday , December 28 9pm.
Met Eireann believes the cold snap may be short lived but rain will follow although temperatures will rise.
The forecast as follows:

Thursday: A sunny morning but sub-zero temperatures everywhere with icy conditions on untreated surfaces.
A band of cloud with patchy rain, sleet and snow will slowly extend from the southwest during the day.
Top temperatures only 1 to 5 degrees in a freshening southeasterly wind.

A dry start to the night over Ulster and Leinster and it'll be cold and frosty with sub-zero temperatures in the early part of the night giving icy stretches on untreated roads and footpaths. Rain in the south and southwest will spread to all areas overnight, and as it meets the cold conditions in Ulster and Leinster the rain will turn readily to sleet and snow. The rain will clear to showers overnight, and temperatures will have risen by morning to reach 3 to 5 degrees. It will become breezy for a time overnight with mainly southwest or southerly winds.

There'll be scattered wintry showers at first on Friday, becoming isolated by Friday afternoon with a dry interlude developing. It will be short lived, however, with another spell of rain developing in the southwest, becoming widespread in the evening as it extends northwards. Once again there'll be spells of sleet and snow mixed in with the rain. Temperatures will be between 3 and 5 degrees in the north, between 5 and 7 degrees in the south. Winds will be moderate to fresh westerly backing southerly with the advancing rain.

Strong southwest winds will develop during Friday night. The rain and snow will clear northwards with clearer weather with scattered showers developing in the south. It'll be cold early in the night with temperatures near to freezing, but temperatures will rise overnight with the strong winds and will be between 6 and 8 degrees by morning.

The forecast for Saturday is somewhat uncertain. Currently it looks like starting off with a fair amount of dry weather and some showers. However it will become wet and windy in the second half of the day as rain, sleet and strong southerly winds move eastwards. There's a risk that it may become stormy in some parts of the country as winds have the potential to become very strong as an area of low pressure tracks directly over the country. The exact track of the low pressure centre will be uncertain until closer to the time. Keep informed on this page as we move closer to Saturday. Temperatures on Saturday will be between 5 and 7 degrees in the north and 9 to 11 degrees in the south.

Sunday will see fresh southwest winds bringing showers, the showers most frequent in the western half of the country. Temperatures in the afternoon will be between 5 and 7 degrees and should remain above freezing at night.

The current indications is for unsettled conditions for next week with westerly winds and rain at times.