Is it possible that the #EuroMillions lotto jackpot was sold in Laois for the second time? 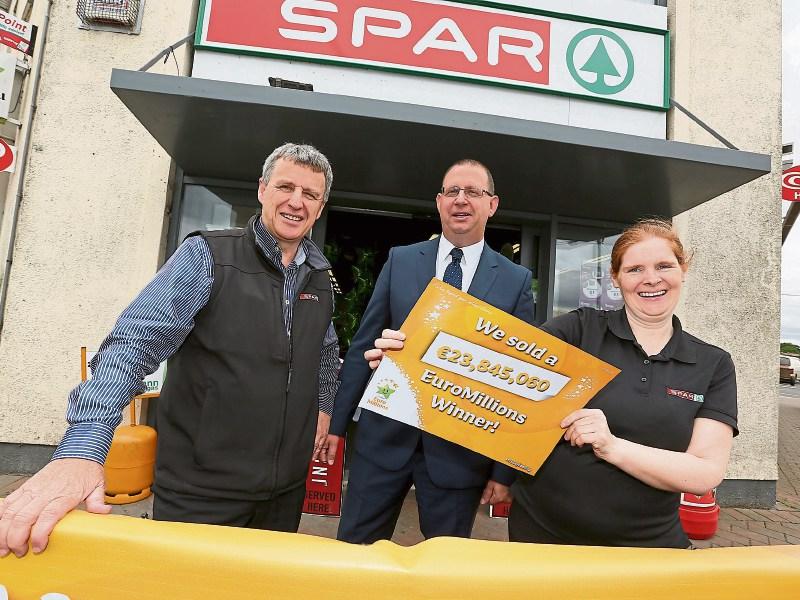 O'Hanlon's Spar Portarlington where a jackpot ticket was sold in July 2016.

A winning EuroMillions ticket was sold in Laois and it's possible the latest jackpot bought in Ireland winner of Friday night’s mega EuroMillions €38.9 million to prize could have been sold in the midland county.

In July 2016, 22 colleagues from Dublin Bus won €23.8 million. The ticket was sold in O’Hanlon’s in Portarlington.

This is the third EuroMillions jackpot won in Ireland this year and the 12th since EuroMillions began in 2004.

A National Lottery spokesperson has appealed to players to check their numbers to see if they are the holder of the golden ticket worth a cool €38,906,715.

The spokesperson said:  “This is fantastic news! What a great way for a player to end the year and start the new. This has been an amazing year for our EuroMillions players with three Jackpot wins and 31 EuroMillion Plus wins of €500,000 each.

“We are urging all our players to check their tickets to see if they are the lucky winner or winners. At this stage, we don’t know if it’s a single winner or a syndicate.

“We advise anybody who has this ticket to keep it safe until they can get into the National Lottery office next week to make their claim. This is a valuable piece of paper. We are open after the New Year's break on Tuesday,” said the spokesperson.

There is also time left for a lucky National Lottery player to win a guaranteed one million euro in the Christmas Millionaire Raffle draw which takes place on New Year's Eve. As well as the top prize of €1 million there are 5,055 other great prizes ranging from €250,000 to €500. Tickets are on sale in-store or at lottery.ie

This is the third EuroMillions Jackpot win in Ireland this year.

In January a Dublin work syndicate claimed a €88.5 million EuroMillions jackpot. The winning ticket was sold at the Applegreen Service Station on the M1 Northbound in Lusk, Co Dublin.

And in July a  lucky West of Ireland syndicate scooped almost €29 million on a ticket sold in the Garryduff XL Store, Castlebar, co. Mayo.

10.  January 2017: A Dublin work syndicate claimed the €88.5 million EuroMillions jackpot. The winning ticket was sold at the Applegreen Service Station on the M1 Northbound in Lusk, Co Dublin.