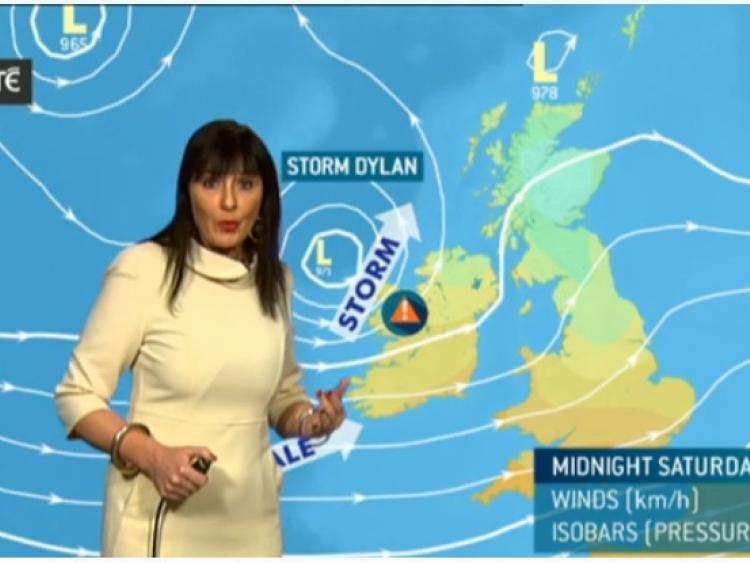 Met Éireann has included Laois among all Leinster counties including Dublin, Offaly and Kildare in its latest weather warning news as Storm Dylan bears down on Ireland.

The forecaster updated its weather warnings ahead of the arrival of the Atlantic storm which is expected to hit the west and parts of the north Leinster hardest. It will be a wet and very windy overnight as the storm hits.

A STATUS ORANGE Wind Warning has been issued for all of Connacht, Cavan, Monaghan, Donegal, Longford, Louth, Westmeath, Meath and Clare was updated at  on Saturday, December 30

The warning states that Storm Dylan will track northeastwards close to Connacht and Ulster coasts that Saturday night and Sunday morning. Met Éireann says the biggest impact from the storm will be in western and northern counties with west to southwest winds reaching mean speeds of 65 to 80 km/h with gusts of 110 to 125 km/h. High seas along the west coast too with the risk of coastal flooding.

The forecast track of Storm Dylan.
Get the latest warning updates here:https://t.co/X6NncUghZ9#StormDylan pic.twitter.com/FVxhsHtwkV

The latest Met Éireann update of this warning says that tonight and Sunday morning west to southwest winds will reach mean speeds of 45 to 65 km/h with gusts of 90 to 110 km/h  as Storm Dylan tracks to the northwest of the country,

THE LATEST FORECAST IS AS FOLLOWS

Bright and blustery today with sunshine and showers, becoming confined to the north with this afternoon. A little milder than recent days with highs of 6 to 10 degrees Celsius, in to southwest winds, which will ease for a time into the afternoon.

Rain in the south will spread countywide later this evening and winds will begin to strengthen.

From around midnight onwards, it will become stormy in the west and northwest with severe or damaging gusts of up to 125 km/h. Very windy further east with very strong and gusty west to southwest winds. Further spells of rain, mainly occurring early on. Lowest temperatures of 2 to 6 degrees Celsius, coldest further north.

Sunday morning will continue very windy or stormy over the northern half of the country. Very strong and gusty west to southwest winds will persist for a time with further severe gusts of up to 125 km/h. In the late morning, winds will, however, begin to ease. There'll be sunshine and heavy possibly thundery showers through the day too. Feeling cool with highest temperatures of 6 to 9 degrees Celsius.

On Sunday night, New Eve, it will be cold and mainly dry with frost in many areas and some icy patches. Lowest temperatures of -1 to +3 degree.

New Year's Day will bring a mix of sunshine and showers. There may be more prolonged rain in the south for a time. Highest temperatures of 5 to 8 degrees with light to moderate southwest breezes. On Monday night, there'll be some ground frost in places.

On Tuesday, after a dry start, it will become wet and blustery as rain spreads eastwards. Highest temperatures of 7 to 10 degrees with fresh to strong west to southwest winds.

Wednesday will be cold, windy and showery with some of the showers turning wintry. Highest temperatures of 5 to 8 degrees with fresh, gusty northwest winds.
On Thursday, rain and sleet will spread eastwards to all areas, clearing to showers on Thursday night.

Friday will be cold and showery.