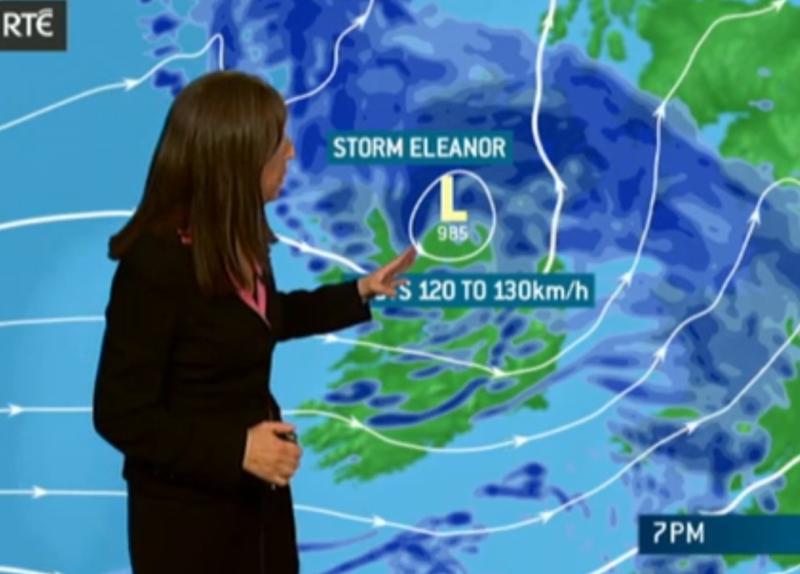 Storm Eleanor winds have hit Status Red levels as the storm hit the west coast of Ireland, according to Met Éireann.

Speaking on the news on RTÉ Met Éireann weather forecaster said the wind speeds have hit 140 km/h at Mace Head, Co Galway. Status Orange warnings are in place but wind gusts in excess of 130 km/h are classed in the category for red alerts.

By a 155km/h gust of wind was measured at Knock Airport in Mayo.

The worst of the storm's winds are set to be felt across the middle of the country as its centre tracks to the .

Galway city centre has already begun to flood while thousands of people living in Galway and Mayo have lost power. More counties across the Midlands are set to be hit by the storm as it tracks westwards across the country.

The storm is set to track quickly eastwards this evening with extremely windy and blustery conditions in all areas tonight. Strong to gale force and squally south to southwest winds over Munster and Leinster veering westerly this evening with some very severe and damaging gusts and also very high Atlantic coasts.

Met Éireann says that as the storm tracks into the North Irish Sea later this evening and early tonight the winds will become strongest along the east coast, but then westerly winds increase later again along Atlantic coastal counties, where seas will continue very high.

A spell of heavy and locally thundery rain over the north will clear heavy squally showers with the risk of hail or thundery downpours leading to flooding locally. Also some damage and coastal flooding possible. Lowest temperatures 3 to 7 degrees.