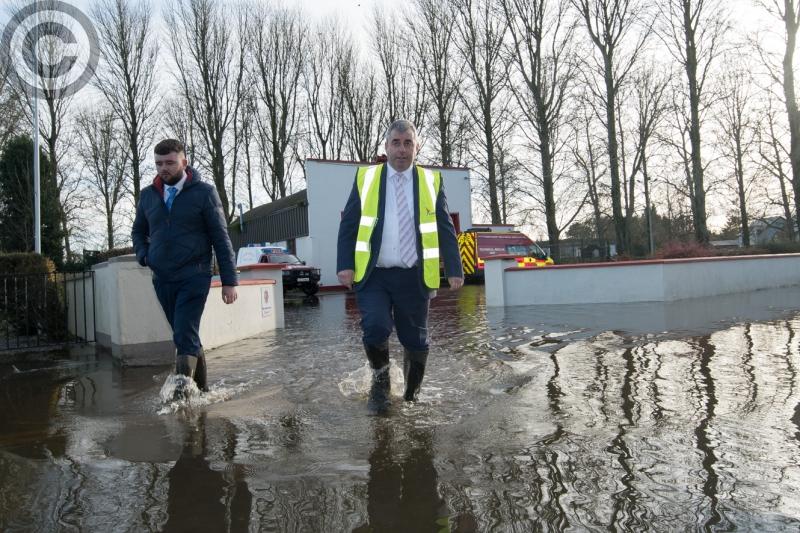 As Galway reels from Storm Eleanor floods today January 3, Minister of State Kevin 'Boxer' Moran who visited Mountmellick after it flooded on November 22, says lessons must be learned by local authorities to prepare better for floods.

He was speaking on the RTE Radio 1 show Morning Ireland this morning Wednesday January 3.

"I will be talking to city and county managers right around the country, because if you look at what happened in Mountmellick, or what happened in Galway or Donegal, we have to learn from this, because these extreme weather events are happening far too often," he said.

New flood risk maps for Ireland are out at the end of January he said, and he will be meeting with city and county managers at that time also.

"We must deliver schemes faster, and look at the planning process, people are fed up waiting, they want to see the machines on the ground," he said.

"This is the start of the new year and we are into the first storm, it's a worrying trend that we have to get real with, in relation to delivering on schemes at a faster pace," he said.

His department has €430 million for flood works until 2021, and an extra €70 million for this year. There are 47 schemes getting €260 odd million, but he said more money is needed.

"I need €1 billion to deal with the flooding overall for the whole country, but can we fast track planning? Do we need to look at our county development plans to put in flood defences? this is something we have to do, we have to build walls and defences. We have people willing to object, but they have to step back and look at how people are suffering, and businesses are suffering, for far too long," he said on Morning Ireland.

Mountmellick flooded on November 22 when heavy overnight rainfall in the Slieve Blooms caused three rivers to burst their banks in and near the town. Over 100 homes and businesses were affected on the main streets and around the Manor Lane and Irishtown areas, with some of them still not repaired and re-occupied.