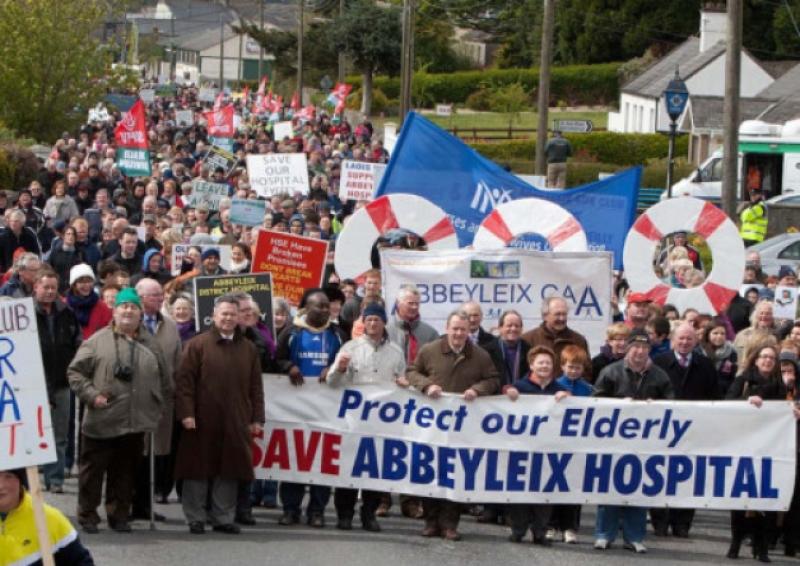 Thousands marched in 2013 to save Abbeyleix hospital. Pic Alf Harvey

A Laois community hospital that the HSE wanted to shut down should be expanded and refurbished as part of measures to tackle the trolley crisis, according to Sinn Féin TD Brian Stanley.

The Laois TD is calling for Abbeyleix Hospital to be expanded and refurbished to cater for the growing number of elderly people in Laois. He said it could also be used as a step-down facility which would free up beds in Portlaoise Hospital.

“Since the campaign to stop the hospital from closing in 2012, there has been no capital investment by Government. It is registered as a 20 bed unit with HIQA and currently has two long stay patients and the others for short stay respite care.

He said that in February 2016 the HSE told me that it proposed to develop an Intermediate Care Service in Abbeyleix. This would see it becoming a a step down and step up care facility.

He was told that this new service model would facilitate earlier discharges from the acute hospital and also prevent acute hospital admissions from the community. It would also provide a range of services which will significantly help to relieve the burden on the Acute Sector while ensuring that people receive the best possible treatment in their own local community.

Dep Stanley said the clearly stated intention of the HSE and Government to use it for “intermediate care” and relieve the burden on the “acute sector” such as in Portlaoise.

In reply to a recent Dáil Question the HSE confirmed to Dep Stanley that the occupancy level and staffing levels at Abbeyleix would be maintained for the foreseeable future. They also stated that they had no plans for capital works in 2018.

"This is very disappointing. Given the overcrowding in Portlaoise and other acute hospitals this opportunity is being missed. The Government and the HSE have shown little or no regard or interest in the public nursing sector. The delay in bringing forward a plan for Abbeyleix demonstrates the paralysis at the top of the HSE and Government in terms of driving forward important capital projects in the public health sector.

“HSE Management are due to meet the Abbeyleix Hospital Action Committee along with myself and other Laois TDs on 18th January. I don’t want a fobbing off event and will be seeking straight answers and a clear way forward for this important facility for Laois,” he said.

The hospital's closure was halted after a big public campaign which involved a number of elderly residents taking the HSE to the High Court.