Abbeyleix hospital can have a big future HSE to be told 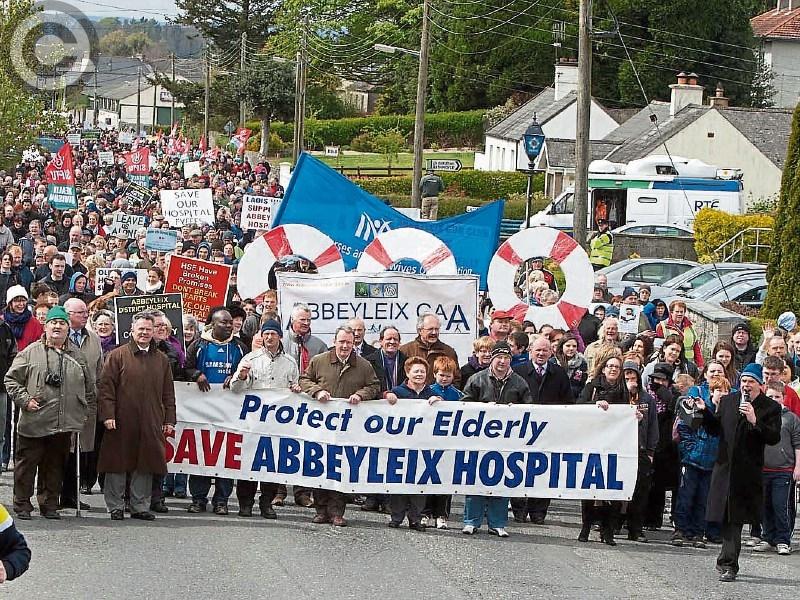 A committee that helped halt the closure of Abbeyleix hospital hope the Health Service Executive are about to embrace a plan which could see the hospital playing a role in reducing the trolley count at Portlaoise and other hospitals.

HSE Management are due to meet the Abbeyleix Hospital Action Committee and Laois TDs this Thursday, January 18 to discuss a possible future for the hospital.

The hospital was saved from the HSE axe after three elderly patients took the HSE to court in 2011. Two big public marches were also organised.

The local committee also drew up an extensive plan for the hospital in 2012.

It proposed expanding the hospital so that more patients could be catered for. However, there are just two long stay patients left.

Brian Maher was involved in the campaign.

Against the backdrop of the trolley crisis, Mr Maher said the plan should be used.

“It still holds true and is as relevant today, almost 6 years later, particularly in light of recent demands for additional hospital beds on Minister for Health, Simon Harris. We remain committed to the retention and expansion of the essential healthcare facility at Abbeyleix Hospital as a means to addressing that relentless demand,” he said.

He said the committee remains committed to the following principles:

· That Abbeyleix Hospital should be re-imagined as a vital component of healthcare in County Laois to provide for an extension to the Community Nursing Unit component which will deliver the capacity for a number of long-stay elderly care beds within the context of a more comprehensive service offer to include a Rehabilitation Centre. This combination of service offered for adults in the district will seek to take pressure off the Midland Regional Hospital at Portlaoise while securing the future of the Community Nursing Unit.

· That the future of Abbeyleix Hospital is secured not just for the short term but for future generations. In light of our increasing population in County Laois which grew by 5.1% between 2011-2016 above a national average of 3.8%. In particular the increasing growth of our elderly cohort of over 65 years of age which has grown by 19.1% between 2011 – 2016.

Mr Maher said this all points to an increasing demand for such facilities as Abbeyleix Hospital provides in order that the State can meet a growing requirement for both private and public beds in a sustainable and planned way.

The meeting with the HSE will also be attended by the Friends of Abbeyleix Hospital.

Mr Maher said it is intended to discuss in a positive way “how we as a community can work together with the HSE to secure the future of Abbeyleix Hospital for generations to come.”

The future of the hospital was raised in the Dáil by Brian Stanley TD for Laois with Minister for Health Simon Harris during a debate on hospital trollies.

"As elderly patients in Portlaoise hospital could be discharged to that facility, Abbeyleix now needs to be expanded and upgraded," said the Sinn Féin TD.