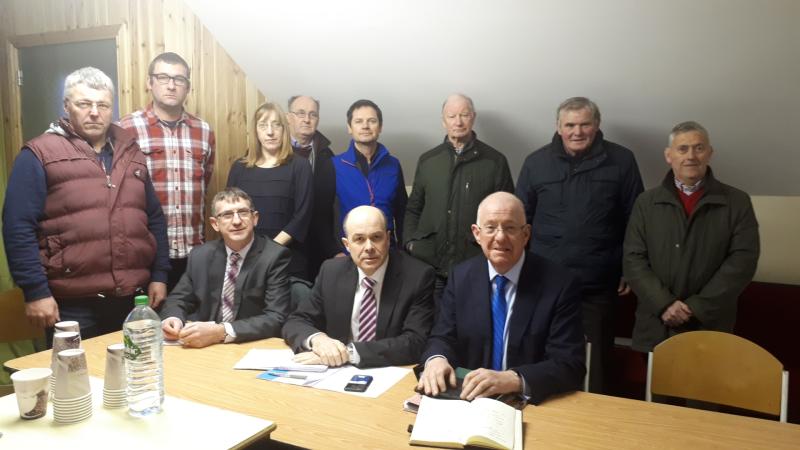 Ministers Naughten and Flanagan meeting members of the RTS Group

The Minister for Communications, Climate Action and Environment, Denis Naughten launched a stinging rebuke to Eirgrid during a visit to Ratheniska on Thursday afternoon.

The Minister made clear his views during a meeting with representatives of the Ratheniska, Timahoe, Spink Substation Group (RTS Group) at the GAA centre in Ratheniska. Also present was the Minister for Justice, Charlie Flanagan.

Minister Naughten said that, "I am here to listen to what the community has to say. I'm here to express my concerns, concerns that were expressed to me by Minister Flanagan, and my annoyance with the breach of the planning permission," he said.

Asked if he is considering calling a halt to the project in Ratheniska, he said that he was limited to what he could say because a complaint by the RTS Group is being considered by the UN's Aarhus Convention, over the lack of public consultation.

"As demand grows for the use of electricity, we must meet needs, there will always be challenges in that, but it is important that there is abidance by the law of the land as regards planning," he said.

Minister Flanagan said the project should not go ahead, saying there had been "a total disregard for the community".

"Eirgrid has acted in a high handed manner and treated the local community very badly. Relations between Eirgrid and the community are such that it is foolhardy for Eirgrid to continue."

A spokesperson for the RTS Group said they were prepared to blockade the land if Eirgrid tries to proceed. He said he hoped the project is stopped because it's not essential.

Local opposition to the development of the large scale Eirgrid development at Coolnabaca costing €110 million and with the capacity to cater for 17 hi-voltage power lines in a rural area, is now in its ninth year.

Eirgrid declined to comment last week, but have noted that the project is a critical piece of national infrastructure.