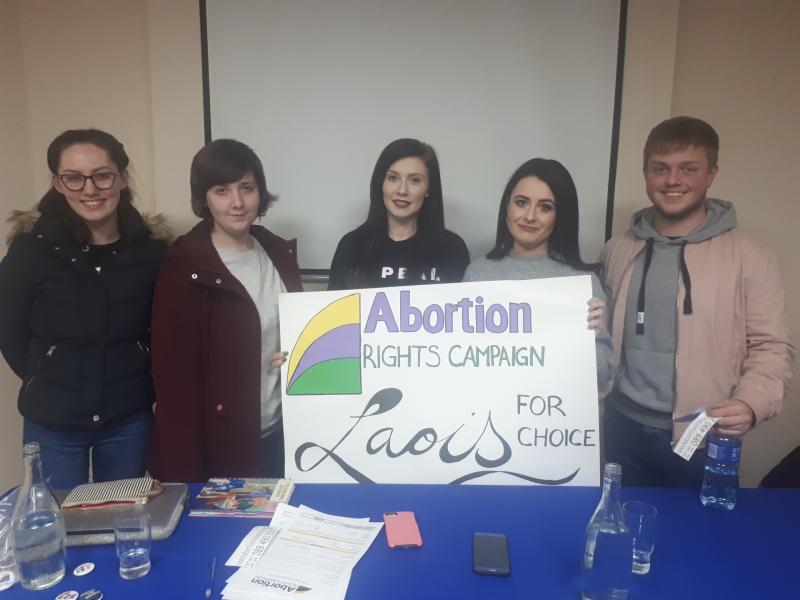 Around 15-20 people attended the first ever Laois for Choice public meeting in Portlaoise this week.

The organisers of the meeting led the discussion for how they want to promote repealing the Eighth Amendment of the Irish Constitution in Laois.

Gearoidin McEvoy who is 24 from Timahoe and and Elaine O’Neill from Portlaoise organised the meeting together through social media.

They said they were pushed to form the Laois for Choice group when they saw the Leinster Express reported on the 'Save the 8th' roadshow that visited Portlaoise and because Laois is one of the last counties to have a local group under the national Abortion Rights Campaign.

“There was a pro-life voice out there and we wanted balance,” Ms O'Neill told Leinster Express.

The Laois for Choice group is affiliated with the Abortion Rights Campaign (ARC) and follows its mandate. All involvement with the group is voluntary and it is a grassroots organisation.

New members signed up to join the Laois for Choice group. There was a membership fee of €5 which Ms McEvoy said stays local to pay for things like renting the room for the meeting.

Introducing the new group, Ms McEvoy said that it aims to educate, promote up-to-date information, challenge the anti-choice rhetoric, mobilise groups to get the pro-choice rhetoric out there and to lift the stigma around abortion.

The issue of urban versus rural was discussed and the idea that “some politicians think it is an urban thing” was raised by Ms McEvoy.

The number of women in Laois who had abortions in the UK and gave Laois addresses was discussed among the group but people in attendance agreed that it is "impossible" to get the exact number.

The 12 week cut off point for abortions was discussed, men and women who attended the meeting voiced their thoughts and opinions.

The topic of Down Syndrome screening was brought up.

“This is what they are going to throw back at you when you say you are pro-choice,” Ms McEvoy said.

Ms O'Neill added that people with Down syndrome children "do not want their children used as pawns in this debate".

How to handle online discussion was also mentioned as well as a number of other topics and the meeting lasted just over an hour.

This was the group's first meeting and in the future it intends to put up stickers and posters in Portlaoise promoting free, safe, legal abortion in Ireland.

Speaking personally to Leinster Express after the meeting, Roisin Barrett who is from Portlaoise but travelled from Dublin to attend the meeting said she made the effort because she cares about the women in Laois.

“I came down tonight because in the midlands the repeal movement is not represented enough so I thought I had to come down and see if there is actually people that care and thankfully there is a room full of people.

“I came down because I care about free, safe, legal abortion.

“There is a very special small town mentality in Portlaoise. Opinions never really change and especially the people my age and older that get out of Portlaoise that is when their opinions start to change, they get more educated. It is just because of the older generation in Portlaoise, I hate to say it but it is ignorance, miseducation and not wanting to learn any more because the church does have a big role here in Portlaoise,” she said.

Watch: Minister reveals how many Laois women travelled to UK for an abortion.

At the first @LaoisForChoice public meeting in Portlaoise. Turnout of around 15-20 people discussing the Eighth Amendement in Laois. New members have signed up to the voluntary group here tonight. The group is affiliated with the national Abortion Rights Campaign @freesafelegal pic.twitter.com/ETnHeAhT5I