Crash in Laois as roads treacherous after overnight snow and ice 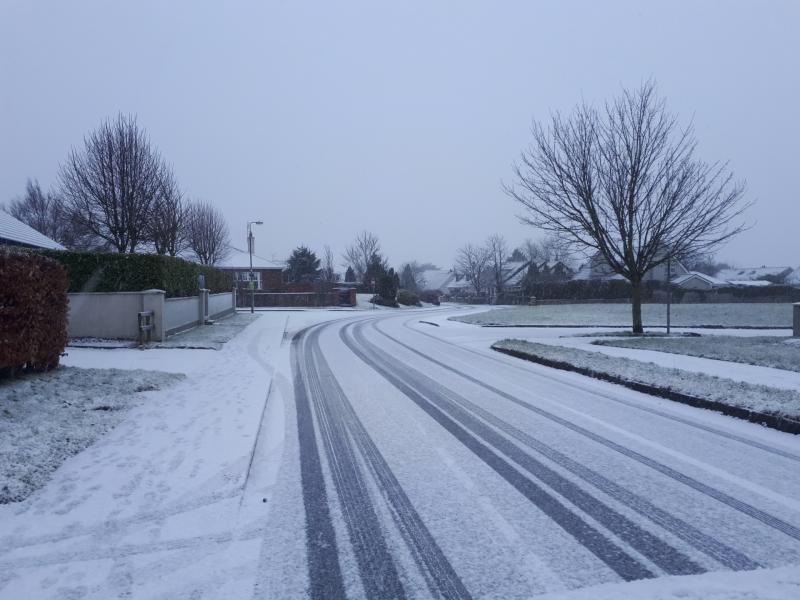 Gardai are dealing with a crash on the Stradbally to Ballyroan Road this morning as roads are treacherous after overnight snowfall and ice.

Driving conditions are very poor on the N80 Stradbally/Portlaoise Road and there are heavy delays heading into Portlaoise
as a result.

Traffic on the Mountmellick road in Portlaoise was backed up as far as Fairgreen in the morning rush hour.

#LAOIS Crash Stradbally/Ballyroan Rd (R427) where there is ice on the road. Nearby, conditions also poor on N80 Stradbally/Portlaoise Rd, there are heavy delays heading into Portlaoise. https://t.co/PSzIBsvOzE

Elsewhere, there are very poor conditions outside Tullamore on the Portarlington Rd at Meelaghans, where several incidents have occurred.

Met Eireann issued a status yellow snow and ice warning to all of Ireland yesterday which is valid until 12pm this afternoon.

A layer of snow covers Portlaoise this morning with the last snow shower at around 8am.

Snow showers are expected to continue until lunchtime.

Temperatures in Laois will reach a maximum of 4 degrees today.

Let us know the weather and road conditions where you are.

I woke up to a beautiful, white, winter's morning today here in Portlaoise. pic.twitter.com/aHsmBb5EzE

Cold this morning with frost and ice. Brisk westerlies, with sunny spells and scattered wintry showers through the day, most frequent over Ulster and Connacht, with the risk of thunder. Top temperatures of only 3 to 6 degrees. pic.twitter.com/IpWG3LMzqd