Renewed hopes that HSE will see the potential of Abbeyleix hospital 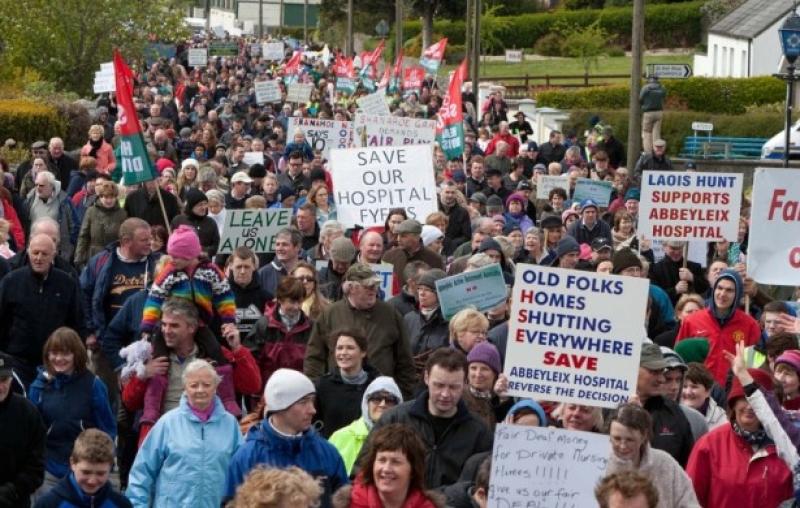 There are renewed hopes that the HSE is to make a long term commitment to use Abbeyleix community hospital to its full potential after the trolley crisis forced the removal of a ban on admission of patients to the hospital.

Some seven years after the HSE tried to close the hospital in 2011, a HSE official met members of the Abbeyleix and District Hospital Action Committee, the Friends of Abbeyleix Hospital and three Laois TDs this week.

The Community Health Office manager confirmed the HSE has finally relented on its policy to refuse to accept discharges from the Midland Regional Hospitals in Portlaoise and Tullamore. The change was brought about by the trolley crisis in Emergency Departments.

The HSE has refused all such referrals since 2011 when it also brought an end to long stay patients being admitted to the hospital. Before, that there were 50 long stay elderly residents - now there are just two. The hospital also caters for 16 respite patients. The approved capacity is 20 patients.

The hospital's medical director Dr John Madden attended the meeting. He said there was a commitment to examine the admissions of long stay patients under the Fair Deal scheme.

The Abbeyleix-based GP also confirmed that the official agreed to organising a visit by other health managers to the hospital with a view to expanding the facility to a 50 bed unit.

The committee drew up the comprehensive plan for expansion to develop such a unit in 2012 when the HSE was forced to consult with the public on the hospital. The plan went beyond more beds. It envisaged the provision of a broad range or services.

There was also a restatement of a pledge made in 2016 that the hospital would not be closed.

Dr Madden told the Leinster Express that he was more hopeful after the meeting for prospects for the hospital. He also acknowledged that the official gave no guarantees but insisted that the HSE manager was given a clear message that the campaign to make full use of the hospital will continue.

"We are not going away. Jude O'Neill left the meeting with a really good idea how angry and upset we are but also how willing we are to forget what they have not been doing," he said.

Dr Madden has his reservations about the HSE's intentions. He was anxious that the HSE needs to produce a budget and plan to back up any discussions. He insisted that the HSE would have the support of the community in practical ways if it agreed to expand Abbeyleix.

He was also concerned that the hospital is not as well equipped as it was in 2011. Staffing has changed and reduced. Nursing retirements are due.

Legal action by three residents, two large marches and the campaign mounted by the action committee prevented closure in 2011.