HSE attacked over 'appalling' and 'disgraceful' use of Abbeyleix hospital 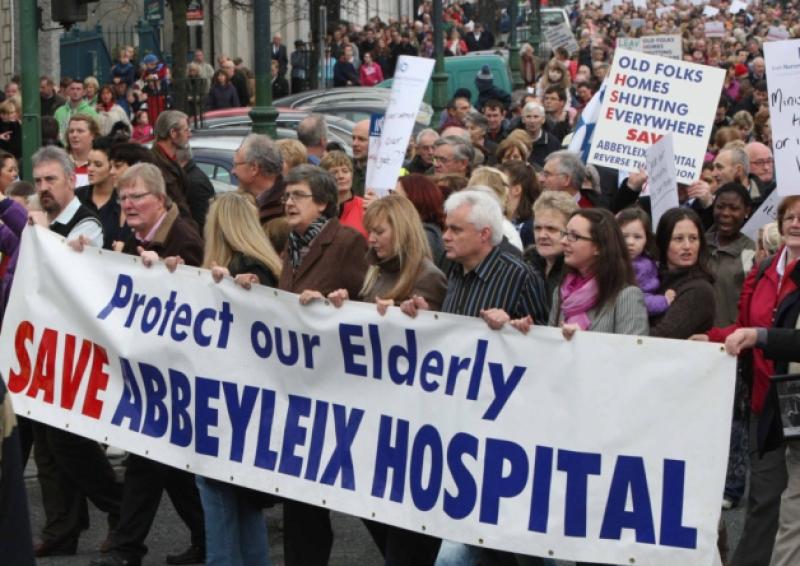 Part of a protest march in Abbeyleix over the closure of the Abbeyleix District Hospital.Picture: Alf Harvey.

Sinn Féin and Fianna Fáil TDs have hit out at the HSE over its management of Abbeyleix community hospital after it emerged that the HSE has been forced to lift a ban on admissions due to the trolley crisis.

Sean Fleming and Brian Stanley rounded on the health service management after getting an update at meeting this week.

The HSE manager confirmed again that the hospital would not close. It was also revealed that a small number of patients will transfer from Portlaoise hospital to Abbeyleix on a "step down" basis.

Deputy Fleming said that there was some good news while the overall feedback was very worrying .

"The very worrying aspect of the meeting is that the HSE has no overall plan for the future of the hospital. The HSE tried to close this hospital over six years ago and the Courts overruled that action by the HSE as it was illegal.

"Abbeyleix hospital, with a small investment could easily be brought up to standard for 50 residents. It is shocking to think that over six years later the HSE has still no plan for the future of the hospital.

"This demonstrates the complete and total incompetent management of the HSE at regional and national level," said Dep Fleming.

Given that the HSE has allowed such a situation continue for over six years the Fianna Fáil TD said it is "no wonder there is such a crisis in the health services with overcrowding in the A&E Departments all over the country including Portlaoise".

"The HSE's lack of action in relation to Abbeyleix is disgraceful. It was made very clear to the HSE at the meeting that they must draw up a realistic sustainable plan for the future of Abbeyleix hospital immediately. Allowing such a fine facility to be under-utilised in such a manner is a total waste of taxpayers money especially as there is such a shortage of hospital beds," he concluded.

Meanwhile, Sinn Féin TD for Laois Brian Stanley said he told the HSE manager that a plan is essential

"I conveyed to him my total dissatisfaction with the fact that the HSE has not made a clear decision on what they plan to do with Abbeyleix in the long term.

"I told him that Laois has lost 30% of its public nursing home beds in the last 7 years and that there has been no capital investment in Abbeyleix.

"It is an appalling state of affairs that, considering the number of managers there are in the HSE, that they have not been able to make a decision or put in place a plan to expand and renovate Abbeyleix. I demanded that they come back within the next few weeks with a plan for its future," he said.

Deputy Stanley said Mr O'Neill committed to coming back to the Committee with a formal response within 2 to 4 weeks.

"I will be holding him to this," he concluded.

The Abbeyleix and District Hospital Action Committee produced an expansion plan for the Community Nursing Unit in 2012 after the HSE was blocked from closing the facility in 2011.

A High Court judge ordered that consultation must take place before it could take place. Three elderly patients took the case.