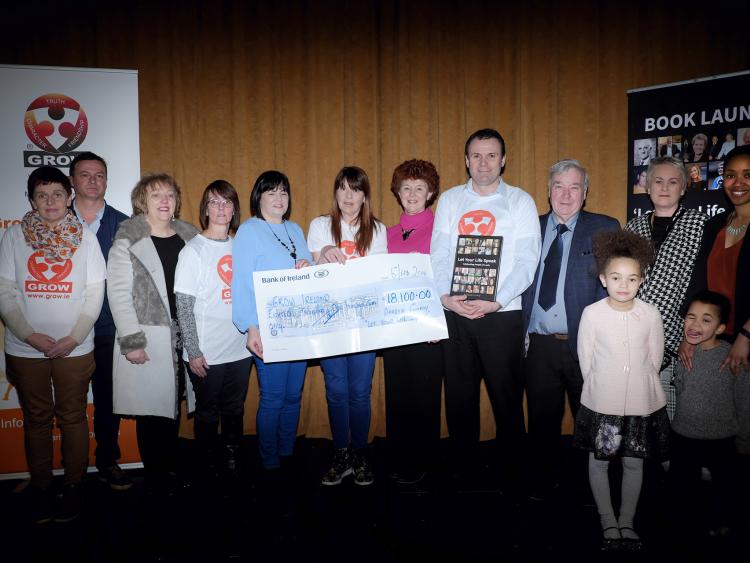 Darren Conroy with his family and committee, presenting a cheque for €18,000 to GROW. Photo: Paul Lalor

A book project by Mountmellick man Darren Conroy culminated in his presenting a cheque for €18,100 to GROW Community Mental Health for new services in Laois.

Darren's sold out book, ‘Let Your Life Speak’ celebrated the most inspiring Laois people, with every penny in profit going to support mental health in his county.

Also at the presentation were Darren's wife Kellie Taylor and their children Rosa and Malcolm, Marie Kavanagh from Mochua Print, and Michael Feeley from the arts centre.

Darren told the Leinster Express what it meant to raise such a large sum.

"For all of us involved from beginning to end, it was a special night and very satisfying to be part of it. For GROW, myself, Kellie, Rosa and Malcolm, Cathy Bishop, Barbara Lalor, Claire Conroy, Lorna Baxter, Marina Dowling, Joe Ward and Michael Feely it is a great result," he said.

The osteopath thanked the community for their support.

"This was achieved by a community effort to promote sales of my book 'Let Your Life Speak' . It was made possible by the generous sponsorship of many people, by the support of Mochua Print, by the involvement of Senator David Norris in launching book, Ger Lynch of LynchMob productions for promo videos and by the many people who bought this book.

"The great thing is that as a result of all of our efforts this money will be spent in the promotion of mental health in Laois from money raised within our own communities," he said.

GROW is hosting a free course on mental health in Wolfe Tone Court, Mountmellick, every Thursday night at 7.30pm until March 1. Call 086 4183805