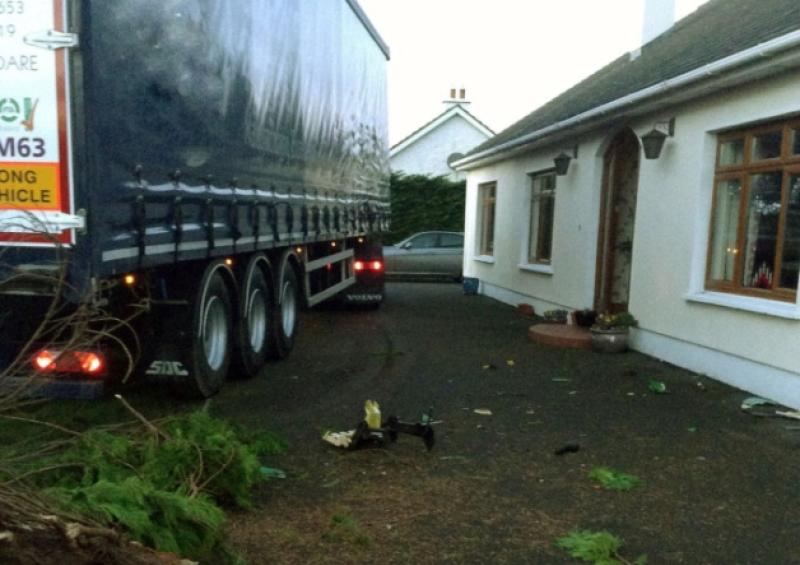 A close call when an articulated truck crashed through trees and a cement fence narrowly missing the Kavanagh/O'Kane house at Kilmullen, Portarlington. Photo: Michael Scully.

Funding of €200,000 has been allocated for road safety measures at the accident black spot of Kilmullen, Portarlington according to Cllr Tom Mulhall.

The money has been allocated under the Department of Transport Road Safety Remedial Measures Scheme after months of meetings and campaigning by the residents who live in fear everyday.

Cllr Mulhall told the Leinster Express that residents were ringing him and Cllr Aidan Mullins on a weekly basis about accidents.

"I have had regular contact with residents in Kilmullen. They have regular meetings and they ring both myself and Cllr Aidan Mullins about accidents almost on a weekly basis. Fences and walls keep getting taken out of it and the residents have witnessed a few frightening experiences as well," he said.

Cllr Mulhall said he expects the €200,000 to be spent on road design works, road widening and cutting out some of the bends on the road that has led to a huge number of crashes.

Mr Delaney was fatally injured when the car he was driving collided with a wall.

At the time of a single vehicle road traffic accident on the road in October, 2017 residents told the Leinster Express that they were living in fear and they had had enough.

Residents started an online petition and had meetings with Laois County Council Officials.

Spokesperson for the residents, Rosaleen O'Kane, said her heart was in her mouth when she received a text alert from her neighbour Madeline Dempsey that there has been another accident in October 2017.

"You just hold your breath until you know the details. Your busy getting kids out to school and going to work and then you hear the sirens and for once the traffic slows down," she said.

The Killmullen residents told of their own experiences with accidents on the road, including an incident when a lorry left the road and ploughed into Ms O'Kane's garden, narrowly avoiding her house.

Ms Shields told of many cars that have landed upside down in her front lawn.

"The council agreed to install solar panel speed signs this week or next as a temporary measure however a long term solution is yet to materialise.

"We told them that over 4,700 cars use that stretch of road on a daily basis and records show some cars are driving well in excess of 90 kph through bad bends and in a 60 kph zone. It was also noted that the road is particularly dangerous after it rains," Ms O'Kane said.

Ms Dempsey recalled the fatal accident last August when a young man was killed after his car lost control outside her house.

The residents circulated and online petition in October calling on the council to improve the road and they have also requested an option for a speed van to be located there in future.

They want the council to reduce the speed limit along the road to 50kph and to take out the dangerous bends.

"We can't sleep at night - it is so stressful wondering when the next accident will happen. We need action and the council needs to come up with a solution sooner rather than later," Ms O'Kane said.

A further €30,000 has been allocated to roadworks at 419 Alley Cross at The Heath and Coolbanagher according to Cllr Mulhall.

"Some of it was done in 2016 but it is the opposite side of the R419 that needs work now. Two minor roads converge there and the road visibility is very bad.

"I know that residents in this area have been bypassing the road because they are taking their lives into their own hands.

"They prefer to go through Shaen. The funding has been allocated to improve the safety. I am pleased with the amount of money allocated in the Road Safety Remedial Scheme. A total of €11 million has been allocated for the county but these are two areas that I have campaigned for," Cllr Mulhall told the Leinster Express.

WIN: A romantic two night stay in a five-star hotel and spa in Donegal.