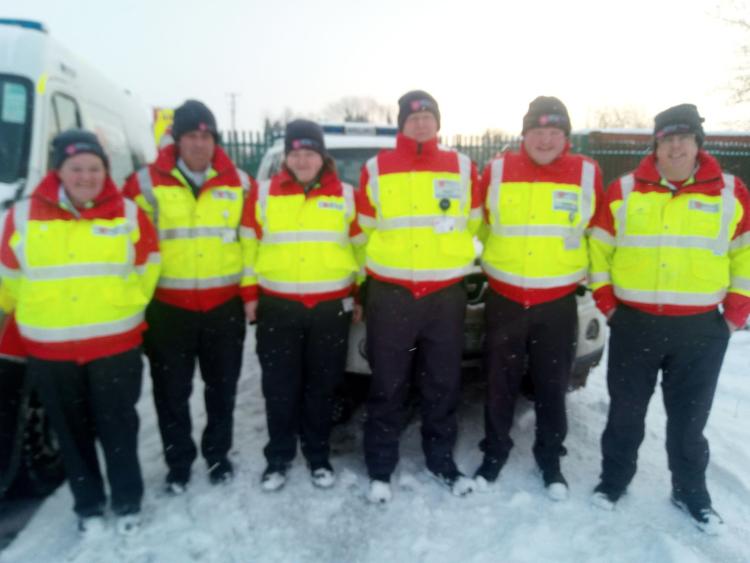 Eleven volunteers with the Portlaoise Order of Malta Unit carried out heroic work during six days of sever weather as Storm Emma swept across the country last week.

From first thing in the morning on Wednesday, February 28 to Monday evening, March 5 the local Order of Malta Unit worked around the clock helping the public.

During this time the volunteers provided two road ambulance covers and a 24 hour 4x4 ambulance cover. They covered an amazing 1,656 kilometres over 382 hours of work, carried out six blood transport runs and a number of essential, life-saving services for the public.

The volunteers also visited the elderly with supplies, assisted with jump starting vehicles, helped with transport for nurses and responded to emergency calls.

Kieran Bradley is an Assistant Cadet Leader with the Portlaoise unit of the Order of Malta.

“We were flat out, we went on standby on Wednesday at 8am the roads were not bad at that stage but they quickly deteriorated and by Wednesday evening we were helping with patient transfers.

“We brought patients from Portlaoise hospital to their homes to places like Rathdowney, the road visibility was very bad.

Mr Bradley told the Leinster Express some of the situations the Order of Malta encountered over the week.

“We were bringing patients to and from all of the midlands hospitals in Portlaoise, Mullingar and Tullamore and doing blood transfers. If we weren’t able to get out to do the blood transfers the operations would be cancelled.

“We brought two patients from Castletown and Portlaoise to Tullamore hospital for dialysis.

“There was a pregnant woman stuck in the back of an ambulance just outside Tullamore and we got a 4x4 to transport her to Tullamore hospital and everything was okay. It was all good news and there were no major problems,” he said.

The road conditions all across the midlands slowed down the work.

“The snow drifts from Portlaoise to Tullamore were very bad especially on Thursday night and Friday.

“Our vehicles had to go on the other side of the road when it was safe to do so when they were unable to pass. Getting around estates was difficult and rural roads were treacherous too.

“It was difficult and time consuming as we had to take our time because we were only adding to the danger otherwise," he said.

The Order of Malta services were coordinated with Voluntary Emergency Services and Joint Voluntary Command And Control Centre throughout its six days of emergency work.

Mr Bradley said the communication ran smoothly and all call outs were well organised through the system. However, the volunteers did receive one hoax call late on Friday night in treacherous conditions. The crew drove from Portlaoise to Newbridge but did not hear from the original caller again.

In numbers, here is the work carried out by the Order of Malta during the storm:

Laois TD and Minister congratulates all on big response to Storm Emma.

Darts star Fallon Sherrock is coming to a dartboard in Portlaoise