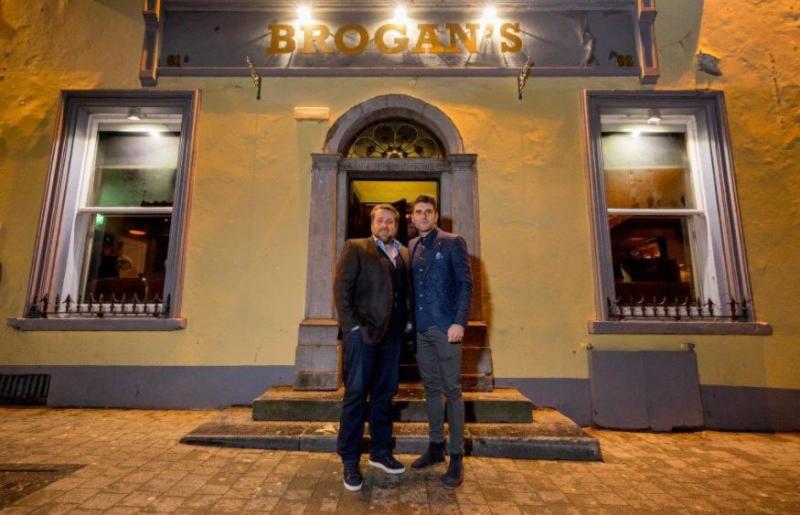 Alan Clancy and Bernard Brogan pictured at Brogan's pub in Kilkenny. Picture from @bernardbrogan on Twitter.

Speculation is mounting that Dublin GAA star, Bernard Brogan, and experienced bar owner, Alan Clancy, are in a joint-venture to open a pub in Portlaoise.

It is understood that Brogan and Clancy have signed a long term lease on the The Blue Door on Main St and that the new bar could be open for St Patrick’s Day. The pub is owned by the O’Loughlin family which is also well known GAA circles.

The pair opened a pub in Kilkenny in December last year. Brogan’s Bar is now a thriving hotspot for nightlife in the city.

It appears likely that refurbished landmark pub is going to be renamed after Brogan, similar to the Kilkenny bar.

From a famous GAA family, Bernard Brogan is the son of former all-Ireland winning and All Star player Bernard senior and is the brother of former Dublin players Alan and Paul.

Publican, Alan Clancy controls the NolaClan group behind House on Dublin’s Leeson Street, whose other venues include the Oak, Xico and 37 Dawson Street, as well as bars in Cork, Limerick and Mullingar.

A local source has said the downstairs bar is being refurbished, the popular carvery is set to be replaced by an all day menu, and a new late bar will open at the weekends.

Both Clancy and Brogan were contacted by the Leinster Express, but have yet to comment on the matter. The owners of O'Loughlins declined to comment.

The bar was previously owned by the Egan family.

Portlaoise continues to be a hotspot for weekend breaks and visitors from Dublin, and all over the country.

In June 2017, Dublin GAA supporters thronged the Main Street in Portlaoise when they were in town for a match in O’Moore Park.

In October 2012, Brogan and his brother James co-founded Accounts for Legacy Sports and Entertainment. The Lucan-based consultancy, PR and event management firm now trades under the name, Legacy.

In May 2016, Brogan, along with his father, Bernard Senior, and brother Alan purchased the four-star Pillo Hotel in Ashbourne, County Meath. The purchase has been reported to have cost in the region of €8 million.