No closure, no accountability - just more questions says dad of baby who died at Portlaoise hospital 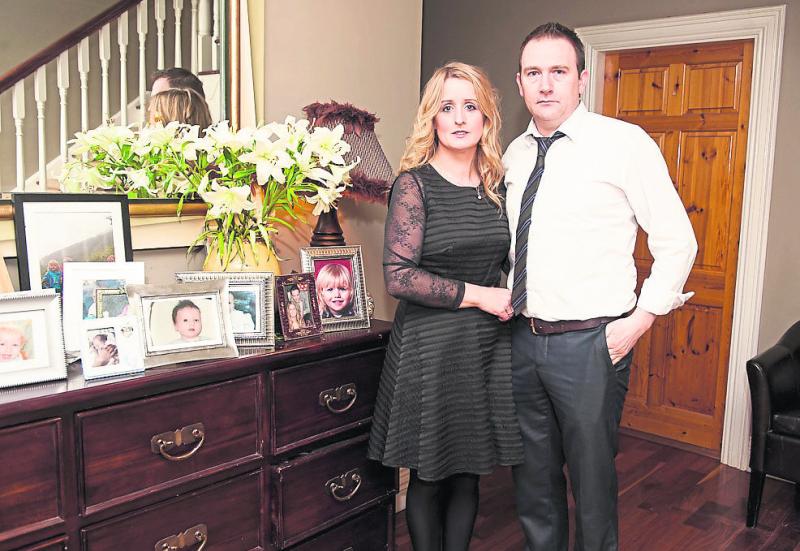 The dad of a baby who died at Portlaoise hospital says he and his wife have been left with more questions than answers by an inquiry which has caused upset and not given closure.

Mark Molloy also called for laws to be introduced to ensure HSE management can be held to account when people suffer harm in the health service.

He was speaking after the Medical Council cleared a non-consultant hospital doctor on most of the charges he faced at a Medical Council Fitness to Practice Inquiry over the care delivered to his wife Róisín during the delivery of their son Mark in 2012.

Dr A was the obstetrics registrar. He was cleared of five of seven allegations. He was only found guilty of changing the notes retrospectively.

The death was one of five which were the centre of a RTÉ Investigates programme. This led to several investigations into the hospital and care delivered. An Taoiseach, Leo Varadkar was Minister for Health when one of these reports was published in 2015. It also led to national change. It also led to the Coombe Hospital becoming centrally involved in the running of the Portlaoise maternity serivce.

However, no HSE has been officially disciplined. Mr Molloy believes the Medical Council outcome is another instance of nobody being held to account.

"We have met Minister for Health Simon Harris on this on a number of occasions and we have future meetings planned with him," he told Morning Ireland on RTÉ Radio 1.

"We have always said Mark's death is not down to the inactions of the people who were delivering him on the day. There were previous reports into deaths and injuries before Mark's in Portlaoise and the recommendations of those were not acted upon.

"This comes back to management level in Portlaoise and at national level in relation to quality and patient safety.

"We cannot continue to keep producing the same recommendations time and time again and no one is held to account over them. There has to be accountability at a management level and that is what we are discussing with the Minister.

"We believe, and other senior people within the HSE also concur with us, that a legislative mechanism for accountability at management level in the HSE is absolutely necessary.

"We have a new HSE director general coming in this year when Tony O'Brien retires. With a 100,000 staff, if he cannot hold his managers to account he or she is facing an uphill battle from the start.

He said the Inquiry has left more questions than answers.

"A lot of evidence was given under oath and lots of evidence came out that was in conflict to previous information that had been given.

"It doesn't give us any closure from that point of view. It just raised even more questions for us really.

"You think of him so often. The local team are training in Under 6s and Under 8s and he should be down there.

"Last September, the first day of school was very upsetting for us when we saw all the boys and girls going in that would have been his classmates.

"We are reminded every day when we look back at pictures of our other boys when they were aged five and six and all the memories we have of them," he said.

"We were taken aback and very upset by the finding. Ultimately, everything really came down to the interpretation of the CTG (heartbeat monitor) being subjective and may depend on the reader's experience.

He said the independent expert from outside the State told the Inquiry that this was a pathological CTG regardless of whether it was from Roisin or Mark. A pathological trace is regarded has having more than one non-reassuring or abnormal sign.

Mr Molloy believes it was not correct to find that the doctor had not errored because others working with him found nothing was wrong.

"But the yardstick that they appeared to base their verdict on was the in actions of others around the doctor on the morning that Mark died.

But he said the finding by the Medical Council is that everything is subjective and it depends on the readers experience.

"Because other people around him did not find that there was anything wrong he didn't act and it seems to be the case that the interpretation of these CTGs in Ireland seems to come up time and time again. It certainly causes serious cause for concern as far as we are concerned," he said.

A HSE report indentified CTG and failure to respond to fetal distress as the key reasons involved in the deaths of babies. Mr Molloy believes this is common.

"Time after time every case we here on the TV or radio comes back to the interpretation of the CTG. The HSE completed their own risk assessment into CTG use last week and basically concluded that there is nothing to see here and everything is above board," he said.