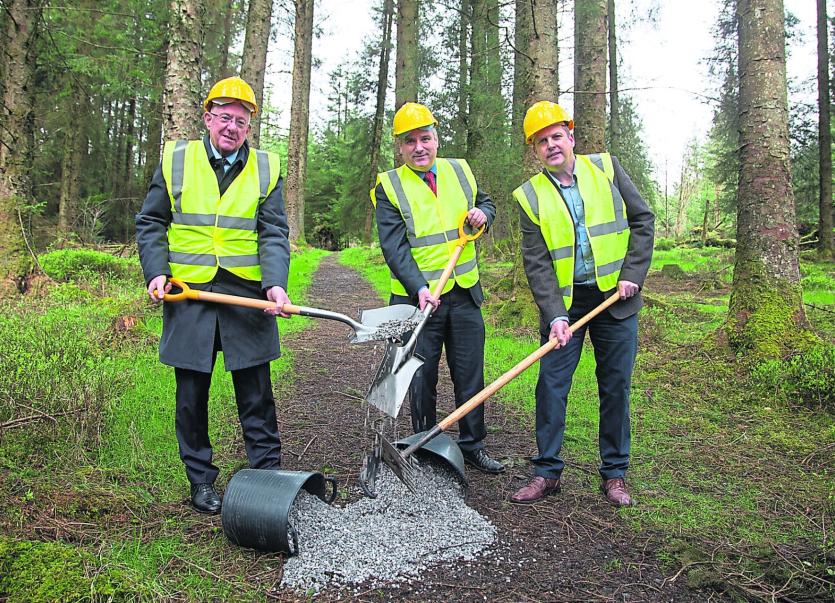 Laois Minister for Justice, Charlie Flanagan has hit out at Fáilte Ireland over their no-show at the launch of a major €5 million tourism project for Laois and Offaly.

The lack of presence by Fáilte Ireland at the sod turning of Coillte's Slieve Bloom Mountain Bike Trail, came just weeks after it left Laois out of a new Hidden Heartlands plan to bring tourists to the midlands.

Minister Flanagan thanked the government for grants of €1.2 million to kickstart the project, and Laois and Offaly county councils for adding over €200k each.

“I am not aware if Fáilte Ireland is here this morning, but somebody might give them a call and tell them Laois is very much in the midlands,” he said.

Phase I constructon will begin immediately by contractors Metro Construction. 35km of the trail is hoped to be open by October, split between Baunreagh in Laois, and Kinnitty in Offaly.
Further grants are expected to follow.

Daithi de Forge, project manager with Coillte, said the bike trail will help to bring international mountain biking tourists to Ireland.
“We expect to start Phase II in early 2019, Fáílte Ireland may be involved in funding it,” he said.

Meanwhile Laois has had to take a DIY approach to attract tourism.
Laois Tourism has now hired a local consultant company to promote the county's facilities.

Laois Partnership is also inviting applications for business start up grants in time for the opening of the trail, which could bring €2 million a year and thousands of visitors to the Slieve Blooms area.

The trail received planning approval in March 2017. Fáilte Ireland caused alarm for local businesses that May when it confirmed that it had not considered funding the trail, throwing its development into doubt. Coillte had hoped to have phase I open that summer.

However a €1m grant followed in July from the the Department of Rural Affairs to rescue the plan.

Fáilte Ireland has now responded to Minister Flanagan's comments to say it welcomes the trail and will be "more than happy to promote the activity when it’s up and running".

"As this was a joint Coillte and Department of Rural and Community Development announcement of funding, nobody from Fáilte Ireland was present. However, Fáilte Ireland very much welcomes the Slieve Bloom bike trail development as activities like this strengthen a destination’s appeal to visitors," a spokesperson said.

Funding of further phases of the bike trail will be considered by the government agency.

"We are already working in a new strategic partnership with Coillte on a number of projects and should they submit a proposal to us in relation to Slieve Bloom, we would be more than happy to consider it," said Fáilte Ireland.

They explained why Laois was not included in the Hidden Heartlands promotion.

"Fáilte Ireland believes that County Laois – with its historic and cultural assets - is very well suited to benefit from Ireland’s Ancient East and, over the last number of years, we have worked closely with the local Laois Tourism group and tourism operators in the county to position them to best benefit from the brand".

They also listed what support they gave Laois in the past year.

"Under our Ireland’s Ancient East capital funding programme, we have invested in the Laois Heritage Trail App and last year we provided tailored fact finding trips for 20 international buyers and overseas media to sample the attractions of the county directly and to assist the promotion of Laois overseas.

"To improve tourism capability at local level, a variety of training workshops and events were held for local businesses in Laois throughout the last year and we will continue to work with local businesses to bring the growth, revenue and employment to Laois which we believe that Ireland’s Ancient east is best suited to deliver," the Fáilte Ireland spokesperson ended.