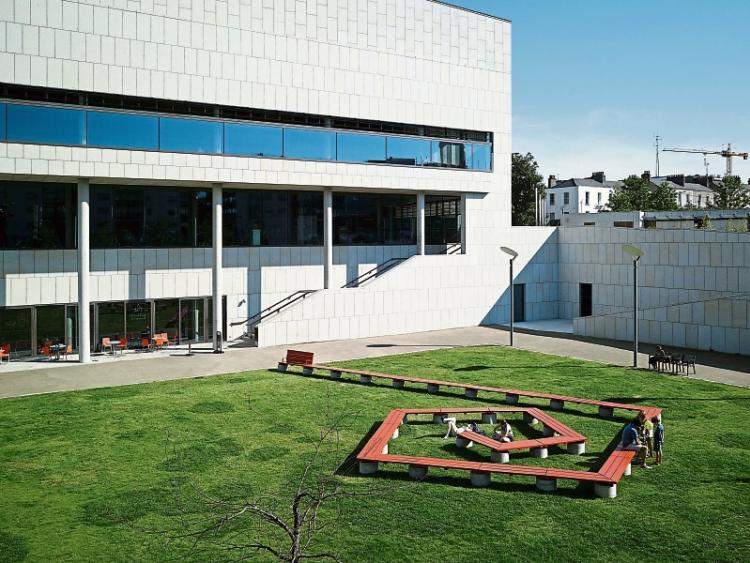 The Mountmellick furniture designer shared the prize for Best Public Space with A2 Architects for the DLR Red Jetty in Dun Laoghaire.

They were joint winners in this category along with Darmody Architecture for the Port Centre Preceint, also in Dublin.

The awards, held last week at a ceremony in Dublin’s Mansion House, recognise the quality of work carried out by RIAI members in 2017 and highlight the contribution that Irish architects make to society for everyone’s benefit.

Now in their 29th year and with 15 categories, this year’s shortlist included 32 projects, spanning 12 counties across Ireland as well as an international project in India.

2018 saw the highest number of entries to the awards since before the recession and the standard was so high that the jury also selected 63 projects for exhibition, which will be shown at the RIAI offices and online later this year.

Full details and images of all the winning projects are available at www.riai.ie.

The Red Jetty was part of the Architectural programme for Creative Ireland 2017.

“With echoes of Dún Laoghaire Pier, the geometry of the bench starts as a line and then spirals in on itself to make a forum at its centre,” says the Dun Laoghaire Town website.

“Painted in a signal red and resting on cylindrical concrete, it can be easily disassembled, allowing for various other geometric configurations to suit its setting each time it is relocated around the county.”

This is the latest in a series of Awards for the Mountmellick designer.

Last year he was presented with the Future Maker of the Year Award 2017 by the Design & Crafts Council of Ireland’s (DCCoI) Future Makers Awards & Supports, one of the largest prize-funded award programmes in Europe for students and emerging makers.

Alan's work is described as straddling “the boundaries of contemporary craft, sculpture and architecture and has been exhibited both nationally and internationally.

Alan initially studied Architecture at UCD and while he did not pursue this as a career, he believes that the knowledge learned has helped him to be the designer he is today.

“I chose the design route because I always wanted the opportunity of creating through the process of making,” he said.

He attributes his success so far to always refining the process of what he does while holding on to the initial vision.

He believes that in working in this way to reach clarity, this enables him to be the best he can be.

He also believes that having three elements to the business allows him to use all his talents to create different products for individual clients’ needs.

The best advice that Alan got was from a lecturer in the furniture industry when he encouraged him to look at the bigger design picture and study Architecture.

For the first two years of his architectural course, he was frustrated because he could not follow his passion.

However, when he took a step back he could see how this disciplined approach would help him long term.