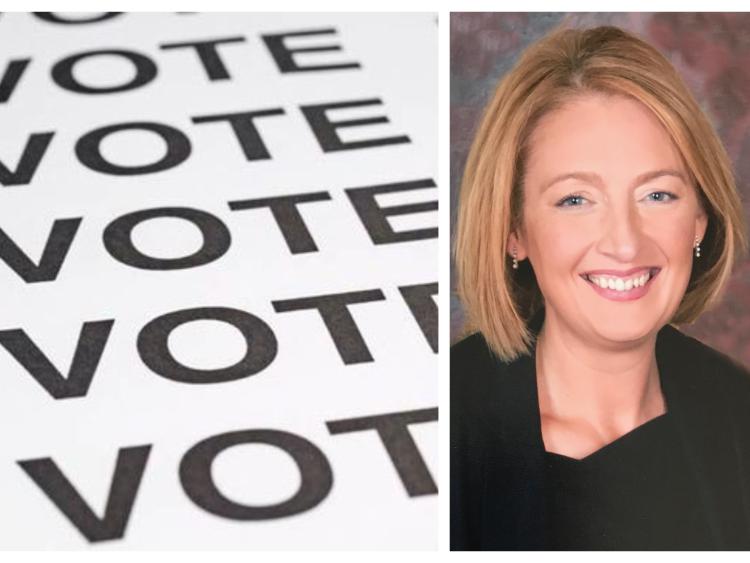 Edenderry barrister emerges as surprise contender for next General Election

The Laois Offaly constituency could be crowded with legal professionals at the next General Election and the person in question would swell the number of women throwing their hat in the ring for one of the five Dáil seats on offer.

Edenderry barrister Christine Traynor will contest the upcoming Fianna Fáil race to choose the party's candidates for the next General Election.

Ms Traynor who has also recently been elected as chairperson of Edenderry Chamber of Commerce, has been surprised at the level of support she's received from locals and grassroots members in recent weeks.

Although John Furey was put forward as the Edenderry Cumann's nominee, Christine has also confirmed that she will contest the convention.

Also competing for a spot on the ballot paper for the next general election within Fianna Fáil in Offaly are sitting TD Barry Cowen, county councillors Peter Ormond and Eddie Fitzpatrick, and John Furey.

"Initially I was keen to put myself forward for the Local Elections which are due next year, providing I can get local and grassroots support. However, the convention for the general election has come about before the local convention and the week the nominations were open, I received a number of phonecalls asking if I would agree to be nominated," Christine told the Offaly Express.

"To be honest when the opportunity arose and given the support from Edenderry members and Fianna Fáil members across the county, I was delighted to agree," she added.

"I am interested in progress, for the town and for North Offaly, and if having representation in this area is able to support the local community in its progress and if there is something that I can do to contribute, then I would gladly accept a nomination. I am privileged to be in this position, and I am surprised at the level of support."

"In the simplest terms, my contribution to public life will be to promote changes that will affect peoples lives in a positive way. I will strive for the best for our constituency and as a former commercial manager, a business owner and a practicing barrister I feel I am uniquely qualified to advocate at national level and I would be privileged to represent our members and the constituency," she continued.

After just one Dail term, the Laois-Offaly constituency is set to return to the original five-seater, reducing the number of sitting TDs between both counties from six to five. The counties share a long political history together with the 2016 election the first time they had been separated for election purposes.

There are two female TDs in Offaly Marcella Corcoran Kennedy of Fine Gael and Carol Nolan of Sinn Féin. Last time around Thomasina Connell contested the Laois constituency for Fine Gael. She is also a solicitor in Portlaoise and could seek to run alongside Minister for Justice Charlie Flanagan again. He is also a solicitor.

Pippa Hackett is set to run for the Green Party in Laois-Offaly.

The counties mirror each other with a TD each from Fianna Fáil, Fine Gael and Sinn Féin. Barry Cowen (FF), Dep Corcoran-Kennedy, Dep Nolan. Sean Fleming (Fianna Fail) and Brian Stanley (Sinn Fein) are the Laois representatives alongside Minister Flanagan.

Dep Nolan is suspended by her party over opposing the repeal of the 8th amendment.