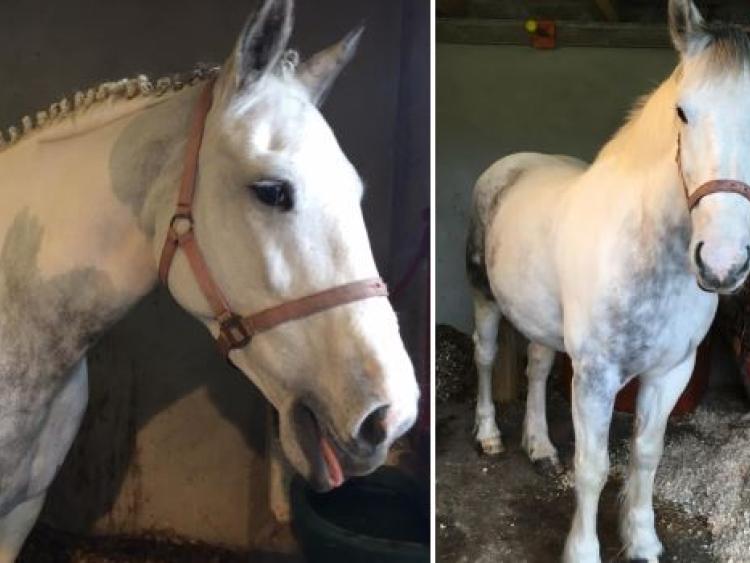 A horse that was taken from a Laois family overnight has been located and returned to the owners following a public appeal.

It is believed the horse was stolen from a field at Shiphouse, Ballymorris, Portlaoise Road in Portarlington some time between 1:00am and 3:00am in the early hours of Friday morning.

Michelle McCormack who owns the beautiful white horse, Daisy, said she is 'thrilled' to have her back.

"I got a phonecall to say the horse was found in a field in the Kildare direction. I am so happy to have her back. Whoever took her took the gate off the hinge and lifted the gate up, that's how we knew she was stolen.

"People in the area saw the horse in the field and thought it was unusual, we know people out that way and they recognised it as our horse and the word was out that she was missing so we went and got her back. She is my baby I am so thrilled. Everyone has been so good and thanks to everyone who was so vigilant and helped get the word out there," she said.

Niamh O'Neill lives near the field Daisy shared with two other horses, she is one of the neighbours helping the family whose horse was taken.

"My husband dropped someone to the airport last night and when he got home around 3:00am he spotted that the gate was open. The two other horses were still in the field, Daisy didn't have shoes on so her feet wouldn't have made any noise," he said.

The public appeal was shared far and wide on social media and the horse has now been returned to the owners.

The incident was reported to gardai.