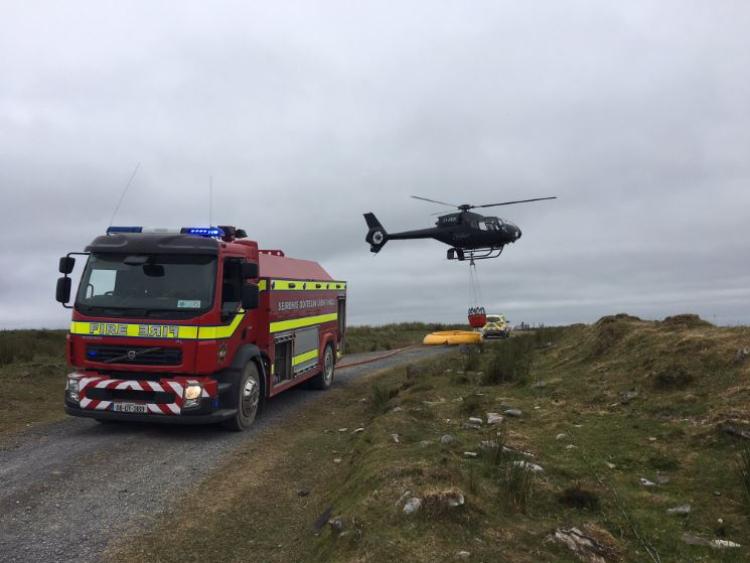 Commercial forestry business, Coillte, has said that it intends to fully investigate the cause of the forest fire in the Slieve Bloom Mountains this week.

Coillte staff were still working on dampening the fire out on Friday afternoon. It was first reported on Wednesday around midday. The Air Corps dropped 68,400 litres of water on the fire during this time and the work is ongoing.

A spokesperson for Coillte issued an update to the Leinster Express.

“Most forest fires in Ireland do not start naturally and Coillte will be fully investigating the cause of this forest fire.”

In relation to the cost of the damage done, Coillte has said it is too early to say and staff were still focused on controlling the fire.

“It is too early at this stage to give an accurate measure of the total area damaged by the fire. Our staff remain fully focused on controlling the fires and working hard to prevent it spreading. The trees involved are mostly commercial conifer tree species.

“This forest fire spread to the tree crowns meaning an overhead fire which is extremely difficult and dangerous to fight.

“The agencies involved worked excellently together to ensure that this fire was contained as early as possible. Approximately 120 people from various agencies, including Coillte were involved.

“At present, there is a RED weather warning in place for forest fires nationally meaning that a high risk of forest fire remains in place.

“Coillte has a comprehensive fire and emergency plan in operation for every forest, which includes the construction of fire breaks, operation of fire patrols, communication with fire brigade services and provision of specialised equipment in high risk areas.

“With the current weather warning in place for forest fires, Coillte recommend the following steps to prevent forest fires at this time:

REPORT any suspicious activity you may observe

REPORT any forest fires you see to local fire brigade

DO NOT approach forest fires under any circumstance, they are extremely dangerous