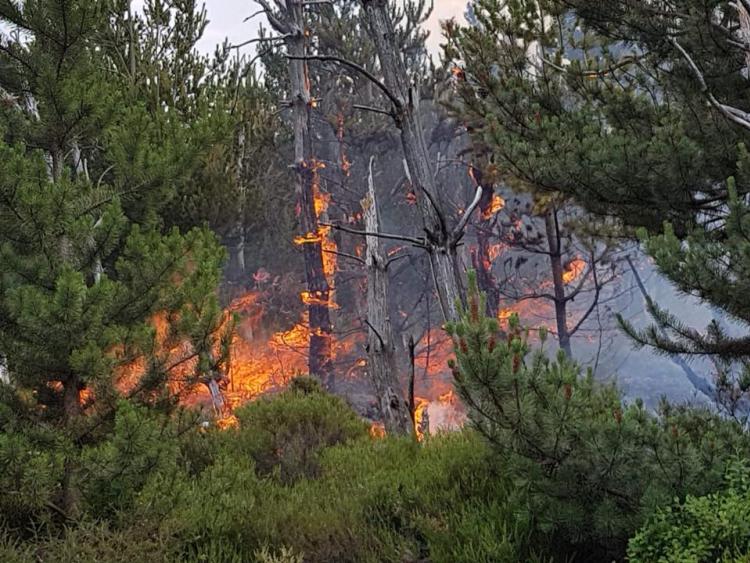 A large forest fire in the Slieve Bloom Mountains was 'contained but not fully extinguished' on Monday according to Coillte, the forestry bussiness that is coordinating operations to stop the ongoing fire.

The fire was fought by 120 people including Coillte staff local fire services and with the assistance of the air corps late last week.

A spokesperson for commercial forestry business, Coillte, has said that 'hotspots' have reignited over the weekend and the fire continued to burn on Monday.

“The fire was contained, but not fully extinguished and on Saturday after significant efforts from all agencies on the mountain, hotspots have again reignited on the mountain.

“Crews worked through the weekend to contain the fire with both ground staff and helicopter assistance.

“With the status red warning in place further flare ups could be likely.

“Coillte reiterate the message of vigilance, reporting and no burning at this time,” the spokesperson said.

Coillte has said that it intends to fully investigate the cause of the forest fire.

“Most forest fires in Ireland do not start naturally and Coillte will be fully investigating the cause of this forest fire.

“It is too early at this stage to give an accurate measure of the total area damaged by the fire.

“Our staff remain fully focused on controlling the fires and working hard to prevent it spreading.

“This forest fire spread to the tree crowns meaning an overhead fire which is extremely difficult and dangerous to fight.

“The agencies involved worked excellently together to ensure that this fire was contained as early as possible.

“Approximately 120 people from various agencies, including Coillte were involved.

“At present, there is a Red warning in place for forest fires nationally meaning that a high risk of forest fire remains in place.

“Coillte has a comprehensive fire and emergency plan in operation for every forest, which includes the construction of fire breaks, operation of fire patrols, communication with fire brigade services and provision of specialised equipment in high risk areas,” they said.

In an early response to the fire last Thursday, Coilte said it was a difficult fire to fight.

"A large area has been burned after a fire spread into a forest area from open moorland. This is a significant fire that is dangerous and difficult to fight.

Smoke from the fire resulted in a number of road closures during the week.

The Cut road L1005 remained closed on Sunday in order to facilitate firefighting operations in the Slieve Blooms.