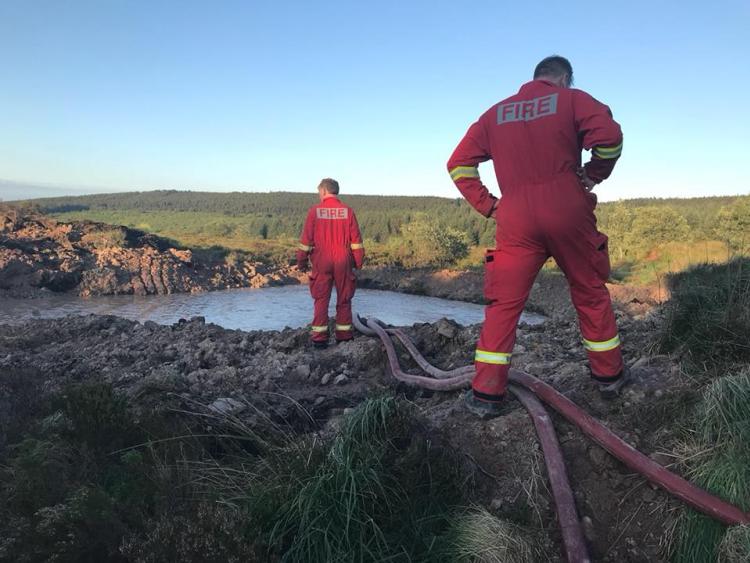 Despite signs that the fire in the Slieve Bloom Mountains was fully extinguished on Friday, Laois fire service had a 'hectic' weekend fighting the blaze after it flared up again according to Laois Fire and Rescue Service Chief Fire Officer, Declan Power.

CFO Power told the Leinster Express in the latest update on Monday, July 9 that the fire was 'beaten down' by lunchtime on Friday but the wind and weather conditions caused it to take off again.

"The fire is ongoing since Wednesday. On Thursday night it was reasonably okay and by Friday lunchtime it was fairly beaten down.

Portlaoise, Rathdowney, Mountmellick, Mountrath and Abbeyleix fire services have worked around the clock in rotation to battle the ongoing fire on the Slieve Bloom Mountains.

There was a helicopter reservoir on the Offaly side being filled by fire tankers and slurry tanks. The other dam for filling helicopters was near The Cut and that was being filled by a tankers from Laois and Offaly.

CFO Power said that 'isolated hotspots' of fire were still burning on Monday around lunchtime.

"It will not fully extinguish until there is a downpour of rain. It needs a good deluge of rain to absolutely extinguish it.

"We are happy at the moment it is totally contained but again, if the wind picks up it could spread," he said.

All of the damage caused has been to Coillte land and the natural wildlife in the Slieve Bloom. No farms or homes have been damaged and no people have been injured.

CFO Power wants to get a strong message across that a red danger warning for outdoor fires remains in place, issued by the Department of Agriculture.

"No fires, no barbecues, nothing lit outdoors, dispose of cigarettes and matches appropriately and people really need to be vigilant, no burning backyard rubbish not even in back gardens, grass is too dry," he warned.

Five of the eight Laois fire crews were out dealing with fires in forests, grasslands or bog fires on Monday.

While crews work around the clock to help with the Slieve Bloom fire, they have also been called to bog fires at Cashel bog on the Abbeyleix Road in Portlaoise and Clonenagh Bog near Mountrath on Monday.

The road at The Cut reopened on Monday but the public is strongly advised to stay away from the Slieve Bloom Mountains until it has been confirmed that the fire is completely extinguished.