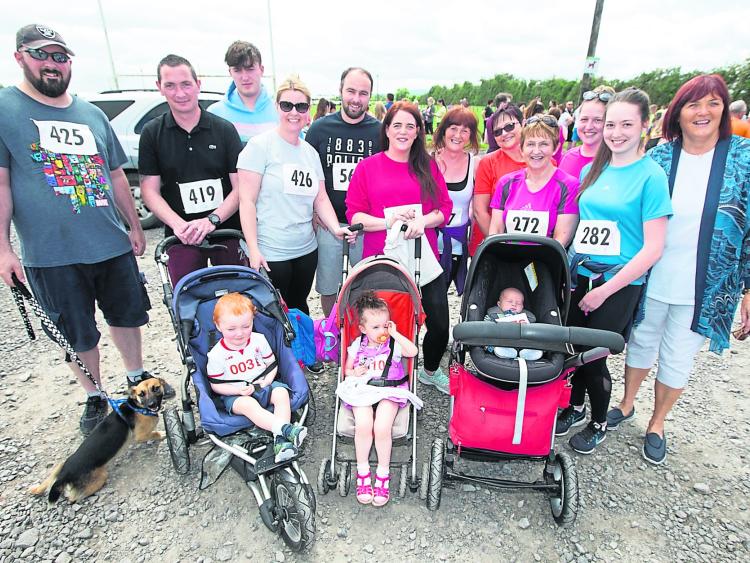 A memorial run/walk in honour of the late Liam Kealy has raised a massive €20,000 for a Cork rescue service.

Family and friends of well-known Liam Kealy from Ballyadams organised a 5km/10km walk/run at Ballylinan Clubhouse which was a huge success for the small community.

There was a massive outpouring of support on the day, June 3, which would have been Liam’s 35th birthday.

A local committee of Liam’s friends and family including his wife Ashling and her family organised the fundraiser walk/run to raise funds for Mallow Search and Rescue in Cork. The voluntary rescue team recovered Liam’s body from the River Lee on January 21 this year, after a night out with friends.

Hundreds of people turned out to show their support for Liam’s family and friends on the day with race entries at €10 and prizes for first, second and third place.

An online fundraiser was also set up alongside the walk/run which raised over €10,000 while a further €10,000 was raised from events on the day.

Gillian Whelan is one of the organisers of the fundraiser. She said the turnout and the support was much more than expected.

"We were expecting a good turnout but we were shocked, over 900 people turned up which far surpassed anything we expected. We were thrilled with this and it reflects how popular Liam was in the community and shows his family and friends how much he is missed and shows how he was held in high regard in the community.

"There was so much support from the community and local businesses and we are really grateful for that," she said.

Gillian knew Liam well and said that the event was bitter sweet.

"It was an emotional event, it was sad because it was Liam’s birthday and there was people who meant a lot to Liam there so it was sad that he wasn’t there but at the same time it brought the community together.

"It meant a huge amount to Liam’s wife Ashling, his daughter Shauna, his parents and his brother and sister to see so many people there on the day, especially since it was his birthday.

"We raised almost €11,000 on the Go Fund Me online and people were really generous on the day giving more than the €10 registration fee for the race," she said.

Due to the fantastic turnout, the organisers would like to see the memorial walk/run become an annual event.

Running clubs and GAA club members from all over the county and country attended and they would like to expand on this for next year.

"It was so well organised, there was a huge amount of food, good signage, all health and safety was taken care of, gardai closed the roads for us there was DJ’s back in the clubhouse after. So many people went above and beyond.

"There were prizes for first, second and third place in the 5km and 10km races for both men and women and a prize for the GAA club that finish first, Liam would have been delighted that his own club St Joseph’s won that," Gillian added.

The money will go directly to the voluntary Mallow Search and Rescue Team who recovered Liam's body from the River Lee in January.

"The machinery they used to recover Liam from, there is only a few of those in the country so we hope it would go towards helping with that, preventing another tragedy or funding equipment to prevent it," Gillian said.

LOOK BACK AT THE PICTURES: Liam Kealy Memorial Run at Ballylinan GAA Club.