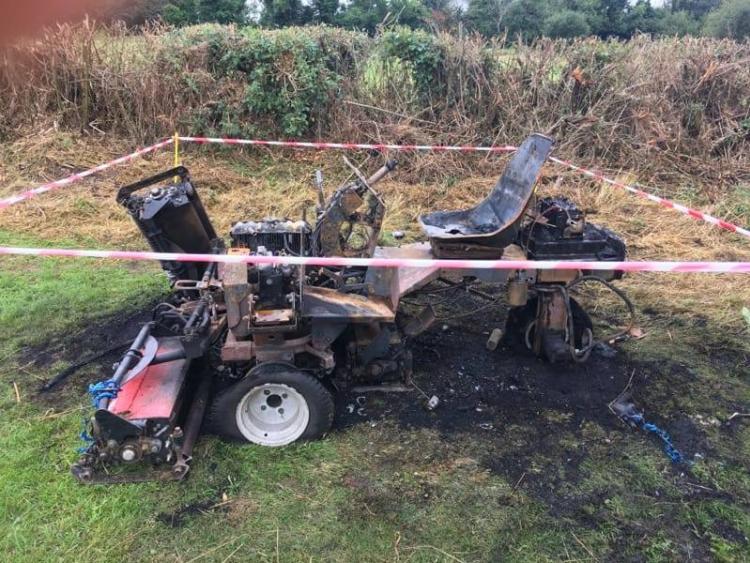 The burnt out lawnmower.

Vandals wreaked havoc on Portlaoise AFC’s fundraising efforts at the weekend by setting fire to the club’s lawnmower.

The soccer club had just finished a weekend fundraising tournament when a neighbour beside the pitch on the Mountmellick Road in Portlaoise reported smoke coming from the club grounds around 6:30pm on Sunday evening, August 12.

Gardai and Portlaoise fire service were at the scene but Chairperson of Portlaoise AFC, Mick Coleman said ‘the harm was done at that stage’.

Mr Coleman said it was ‘absolutely disgraceful’ that a positive weekend for the club ended with their property being damaged beyond repair.

“It is extremely annoying. We had two competitions on Saturday and Sunday with a huge turnout, people came from all over and there was so much volunteer work over the weekend and then to go home and find out vandals did this.

“We spent the weekend fundraising to supply more stuff for the benefit of the kids in the club, there are between 600 and 700 kids and this affects them. We are trying to improve this for them and it is vandalised by local people, it is absolutely disgraceful.

“We are trying to sell our club as best we can and but then we see it vandalised by people from our own town,” he said.

The roller lawnmower machine was burnt out with fuel, hard plastic and rubber giving off toxic flames. It is expected to cost up to €5000 to replace.

Mr Coleman said the lawnmower was not in the store room because it was a busy weekend with so many people around and it was a health and safety hazard to put the mower in the already packed store room too.

“We bring in the goals, nets, flagpoles, into the store room. The lawnmower was left out at the weekend because we are tight for space in the store room and for health and safety reasons it was left out of the way. It doesn’t deserve to be burnt because it is not put inside, it is our property,” he said.

This is not the first time the club has been vandalised as the clubhouse was broken into a few months ago when windows and locks were broken.

Mr Coleman said the pitch has been set on fire in the past and people have parties down there.

“The guards can’t do anything, their hands are tied to a certain extent, they can’t be prosecuted because they are under age.

“It is disheartening, we were on a high after the events and this is like sticking a pin in a balloon,” he said.