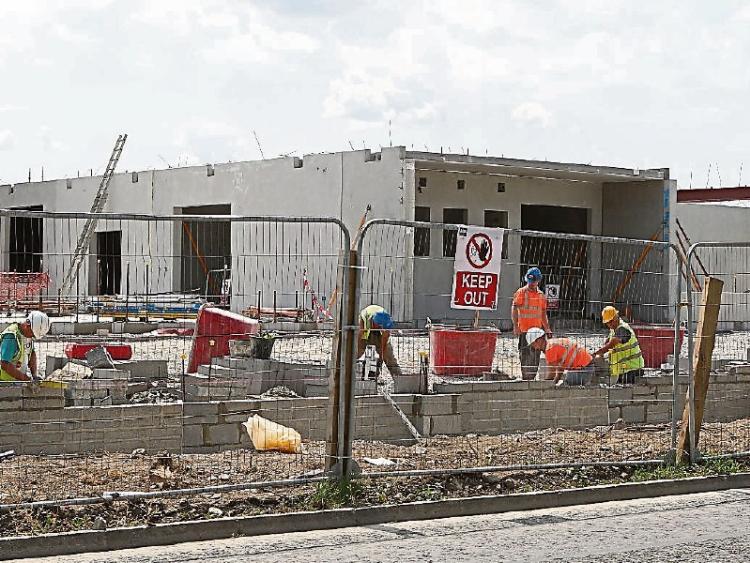 The site of the new St Patrick's boys NS in Portarlington.

Work is still halted at the construction site of a primary school in Portarlington, Laois this week, because caravans are parked illegally on the site.

Two caravans, occupied by a woman and her three grandchildren, are parked on Canal Road in Portarlington, on the edge of the site of the new school for St Patrick's boys national school.

While construction of the school building itself continues on site, work to build a perimeter wall and connect ducting and electricity was halted on August 9, with the excavations stopped inches from the caravans.

Any delay will have a knock on effect of construction of the school and delay the completion date, due to be ready in February 2019.

A deadline is now understood to be issued to the family to move on Monday August 27.

He met with site management and the school Principal Pat Galvin at the site.

“We are demanding immediate action from the authorities, including the local authority, I don't want to see this taking months. Technically they are trespassing,” Cllr Mullins said.

A letter has issued from the Dept of Education to the school's board of management asking them to get the caravans moved or the deadline would be affected.

St Patrick's BNS ran out of space at its old school on St patrick Street some years ago. The 440 pupils are split between the old girls school .

"This school was wanted for the past 20 years, further delays will not be tolerated," Cllr Mullins said.

“It is a shame after waiting for so long. They are going to get very angry and rightly so. I don't want this to escalate but I live in the town and the mood on the ground is people are very angry. They can't understand why this can delay something that is so exciting for the town. We have a fantastic company on site with no delay so far, this is the only negative. Hopefully it will be resolved in the next day or two,” Mr Galvin said.

“We have tried to talk to the family, fair enough they have nowhere to go but the system needs to kick in, I've to fight my corner for the community and the boys of Portarlington,” he said

The grandmother has given her reasons for not moving on. Read here.

ABM Construction is the contractor for the new school, on behalf of the Department of Education. They declined to comment.

The new 3 storey 24 classroom school will have a general purpose hall and 2 class Special Needs Units.

Laois Property: From small to spacious - a Portarlington cottage and a Ballyfin house