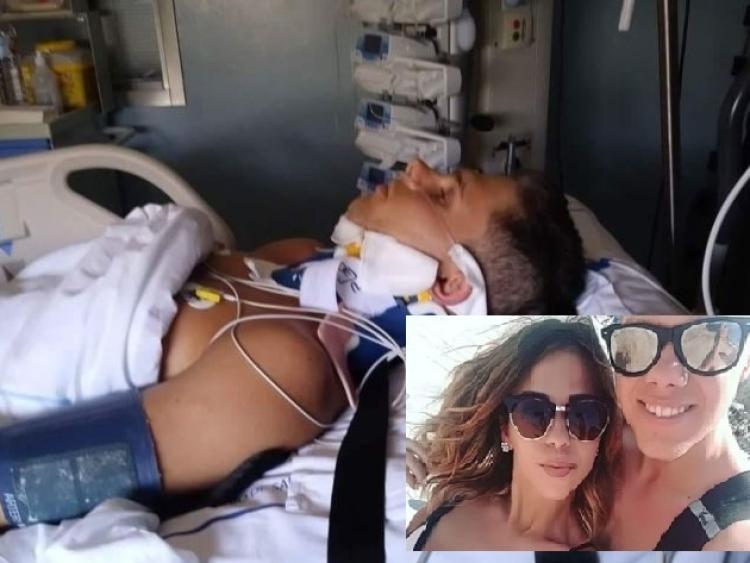 Over €16,000 raised to get Laois man home from Tenerife hospital

Over €16,000 has been raised online to help with the cost of transporting a seriously ill Portlaoise man home after a nightmare holiday accident in Tenerife.

A summer holiday in sunny Tenerife ended up in turmoil for young couple Daniel Wolski and Sara Łukaszewska from Portlaoise.

Daniel Wolski has undergone serious spinal surgery and is now battling pneumonia since the fall on August 1, which caused instant paralysis in his legs.

The Polish native suffered a suspected 'infant epilepsy' which caused him to fall three metres off a wall.

Daniel was diagnosed with anemia, due to a huge blood loss and he was then diagnosed  with a duodenal ulcer which was bleeding and needed urgent surgery.

His girlfriend, Sara, who was on holiday with him, spoke to the Leinster Express about Daniel's condition and the difficult days and weeks after the tragic fall.

“It was one of the most difficult situations in my entire life. The minute he fell I ran down the stairs and it was a massive relief to see him alive.

“When we were brought to an emergency unit it then hit me what has actually happened. His legs were paralysed. We were in a foreign country. Neither of us spoke Spanish. And it was just the two of us.

“I rang my dad crying, I didn't know what to do. My dad got in touch with Daniel’s parents. [Aneta Wolska and Piotr Wolski].

“They then transported him to a hospital on the other side of the island. I was told by the nurses to go back to the hotel, take a shower and bring all the necessary documents.

“For the first few days I stayed in the hotel we were originally booked in which was about 70km away from Daniel's hospital.

“I took a bus every morning to the hospital and stayed with Daniel for the whole day and got a bus back late at night.

“The first few nights were sleepless and full of tears. I was so worried about him. Four days later Daniel's mother arrived to Tenerife. It was such a relief to not be alone. It was also a relief for Daniel, he was constantly worried about me as I was left on my own.

“The first surgery was  the longest four hours in my entire life. And at that time I thought nothing worse could happen. I kept telling myself that it can only get better. I wanted to stay strong for Daniel. I knew he needed support the most.

“Daniel’s dad arrived in Tenerife a week after, it was my birthday and that evening we were hit again, with another surgery, his medical condition was critical. I was devastated, I didn't want to lose him.

“All of us were thrilled to find out the surgery was successful. Since then there has been many ups and downs but we are here together, we reached out to Irish Consul in Tenerife, we have tried everything to get help with transporting Daniel home.

“Unfortunately we were unsuccessful. Then I came up with an idea of setting up a gofundme page.

“I didn't think we'd receive this much support. I am so thrilled. So happy there is so many good people out there. I just want him to be home, to start his rehabilitation to get good medical care. And of course I want to he home too with my family who are very worried and are extremely supportive,” she said.

Sara and Daniel's family are still appealing for people to donate, as they need to raise €30,000 to get Daniel home.