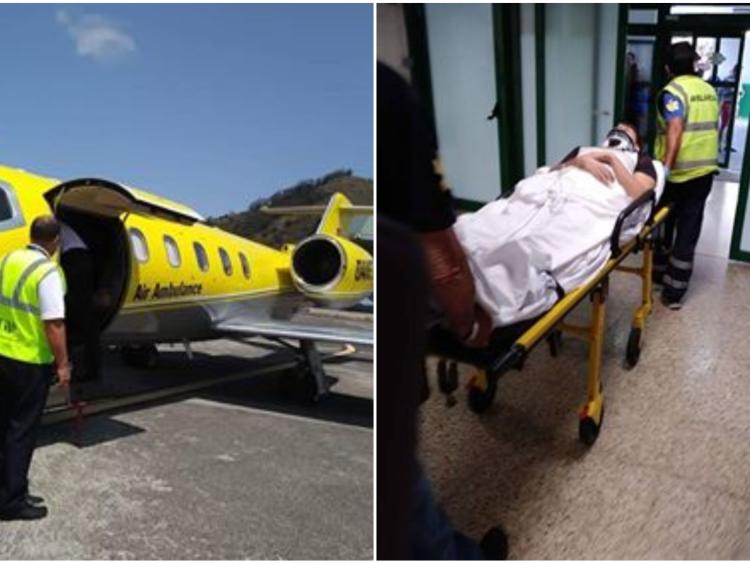 Pictures of Daniel being flown home with medical assistance.

Laois man, Daniel Wolski, who was seriously injured when he fell off a wall while on holiday in Tenerife last month was flown home with medical assistance on Saturday.

Daniel (20) is now in Beaumont Hospital, Dublin and is starting rehabilitation. Daniel, who is Polish but has lived in Portlaoise since 2006, has undergone two serious surgeries since the fall on August 1, which caused instant paralysis in his legs. He spent one month in the Intensive Therapy Unit in a Tenerife hospital. 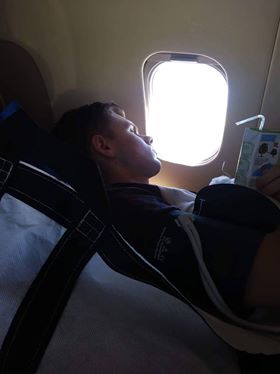 Daniel and his girlfriend, Sara Łukaszewska, both work in The Killeshin Hotel in Portlaoise. Sara has been by Daniel's side since the accident and told the Leinster Express that he could be transferred to Portlaoise hospital.

“We are a bit disappointed because we were told that Daniel will need an intensive rehabilitation and he will have to be referred to the National Rehabilitation Hospital (NHR).

“We were told that waiting times vary from weeks to months. For now he is staying in Beaumont Hospital and they will start rehabilitation there, he could be transferred to Portlaoise hospital because he could get same treatment here.

“If he is discharged from hospital and we will still be waiting for a place in NRH we will more than likely try to find another alternative which would be a private clinic. Just trying to do everything we can to get him back on his feet. Especially that the prognosis is good,” she said. 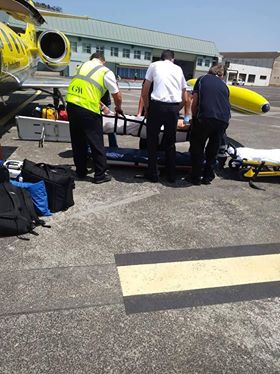 Sara thanked everyone who has donated to the online fundraiser which has raised almost €20,000.

“The fundraiser is going so good, I still cannot get over the fact we have received such support from everyone. So many people have donated and shared our story. Literally lacking words to express how I feel.  I am extremely grateful. It is amazing to learn there is so many helpful and amazing people out there,” she said.

Daniel’s parents managed to secure a loan to bring him home and the fundraising will be used to pay off the debt once it reaches the €30,000 target.

A fundraiser will be held in The Killeshin Hotel on Thursday, September 6 to raise funds for Daniel. Any coffee or cake bought in the hotel’s cafe on the day will be free and people will be asked to make a donation instead.

The hotel has organised a raffle with top prizes including overnight stays in a number of different hotels around the country and prizes from the local community. Enter the raffle on Thursday in the hotel and the winners will be picked on Friday, September 7. 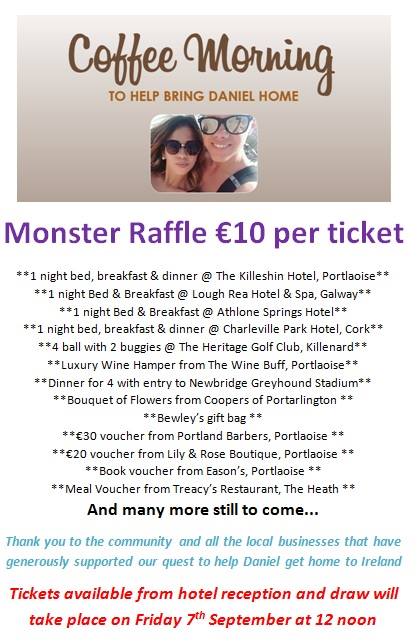