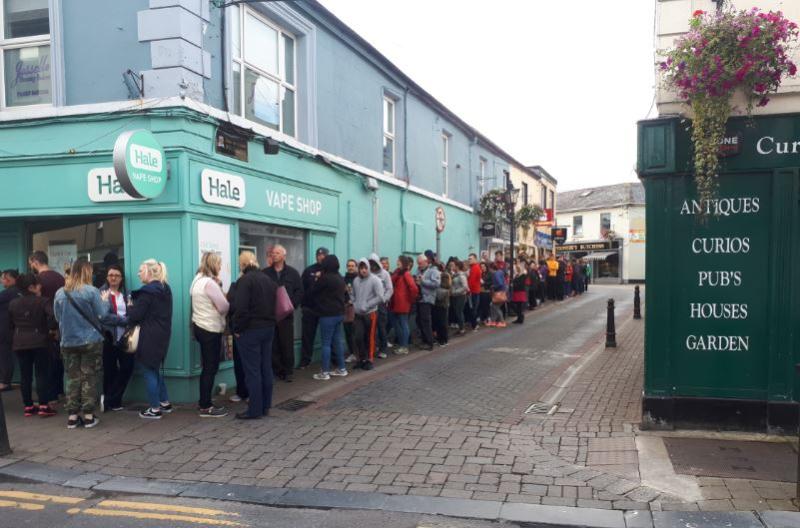 The queue for Electric Picnic tickets at 09:00am on Friday morning stretched from Colgan's around Bull Lane and into Lyster Square

The owner of a Portlaoise shop that hosts Ticketmaster sales was forced to lock himself and his staff inside the shop for two hours after a backlash when Electric Picnic tickets sold out in record time.

Hundreds queued for tickets at Colgan Sports from as early as 4.30am last Friday morning. Aidan Colgan and four staff members locked themselves inside, turned off the lights and sat upstairs “terrified” when tickets sold out unexpectedly early as people kicked the door and banged on windows of the Main Street shop.

Mr Colgan said: “It is unbelievable what went on. Myself and my staff were locked into the shop from 3:40 pm to 5:40 pm. I went out to explain that tickets were gone and it was absolutely unbelievable. The gardai couldn’t come down. It was absolutely terrifying.”

“At the end of the day there is nothing we can do about it,” Mr Colgan told the Leinster Express. “Vile things were said about Colgan’s unnecessarily.

“A lot of people were saying Colgan’s were selling 18 or 20 tickets — that was untrue and it is unacceptable.

“The Ticketmaster guy came down from Dublin. If he gave out four to some people we can’t say, but giving out 20 or 18 tickets didn’t happen because it is against policy.

“There was 200 or 300 people queueing and a few at the top giving abuse who weren’t even queuing for tickets.

“It wasn’t nice from our point of view — you’d think [from the reaction] it was our fault. I feel for some of the people.

Everybody got tickets over the week last year but family camping was gone by 22 minutes past nine in the country,” he said.

Colgan’s sells tickets based on a national online ticket system sold through a Ticketmaster representative who came to the shop on the day.

A spokesperson for Electric Picnic said tickets were sold in Portlaoise for three and a half hours after the sell-out time due to the exceptionally strong demand.

“Anyone who was in the queue at 12:45pm when we found out they had sold out was told they would get a ticket but people arriving into the queue after that would not,” the spokesperson said.

Mr Colgan explained that Ticketmaster had two security personnel on the door on the day. He said they could not guarantee anyone in the queue a ticket as they did not have control of the online system.

Mr Colgan said he was happy he was in the shop at the time, as he had been in Tullamore that morning.

“There were no issues in Tullamore, there was a big queue and at noon I said they were all gone and 95 percent of people said that was grand, no problem. In Portlaoise it was the same with the exception of a handful of people.

“I was delighted I was there with the staff — to be locked into your own shop is horrific.

“It is very stressful the staff couldn’t get out to get a bite to eat. Most people were fine they were asking if we would have more tickets and we said we didn’t know,” he said.

Electric Picnic tickets are expected to go on sale again in the spring.

WATCH: The queue is HUGE for Electric Picnic 2019 tickets in Portlaoise.