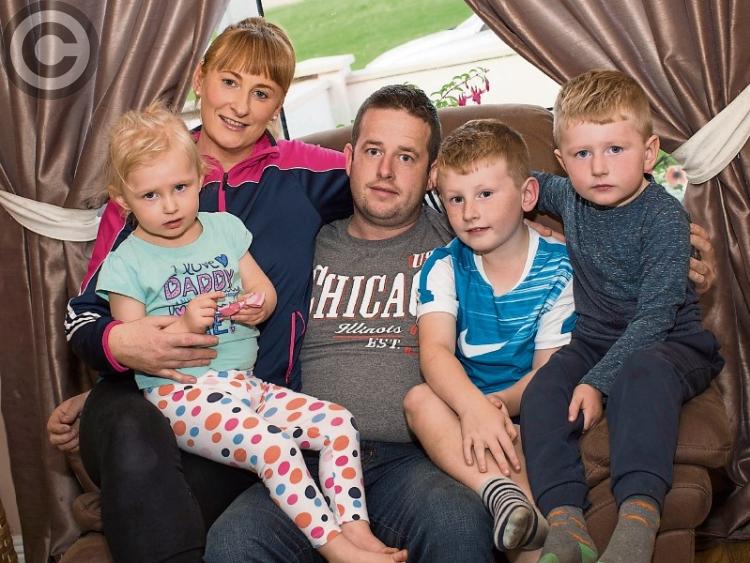 Little Laois girl Mary-Claire Knowles who features on television documentary 'The Town' about Portlaoise, is still getting life threatening seizures, the most recent happening two weeks ago.

The little Ballyroan girl has been saved well over 30 times by emergency teams in Portlaoise Hospital because she regularly suffers long brain seizures, a symptom of Dravat’s Syndrome which can stop her breathing .

It is nearly a year since her mother Rose Maher first stood up and made an emotional plea to keep Portlaoise A&E open, at a public meeting in the parish centre.

Back then Rose told the Leinster Express how Mary-Claire's life depended on Portlaoise hospital.

That situation is still the same today she says.

Portlaoise ambulance staff are are at her side within 15 minutes of a call, with a team ready in the A&E.

“For us and other families, we depend on Portlaoise. For Mary every second counts,” Rose told the Leinster Express this week.

Mary-Claire's most recent seizure was on September 6.

“She had gone nearly the whole summer without one,” Rose said.

Mary-Claire had started on a new drug, but because Dravat's is a drug resistant syndrome, every drug slowly stops working.

“She went 56 days without a seizure. One of the boys picked up a virus in playschool, she got sick and that caused a seizure. After that she was 66 days seizure free,” said Rose.

They were expecting the calm period to end, but it was an intense seizure when it came, happening becuase Mary-Claire developed a throat and ear infection.

“It lasted for 50 minutes. Her airways needed support, her breathing slowed down but didn't stop. The emergency team had her under control ten minutes after she arrived in Portlaoise but after an hour and a half she had another seizure for ten minutes. They gave her IV rescue medication, it relaxes the brain. She slept for nearly a day and a half after,” she said.

“She still has an ear infection. She couldn't walk for nearly five days, she lost her balance from the seizure, her speech became a bit slurred, but she is doing well again now, back on track,” she said.

The programme makers filmed the family last winter and spring.

Rose is glad they took part because it has raised awareness of Dravat's Syndrome but it was hard to watch on television.

“I got very emotional. When you are in the moment, you switch to automatic mammy mode, focusing on getting Mary safe ,” she said.

“A lot of people were absolutely shocked, they didn't realise how hard our life is. People say ah she'll grow out of it, but you don't. She won't be grand,” she said.

She, her husband Anthony Knowles and sons Daniel, 6, and Anthony, 3, live on eggshells awaiting the next emergency.

Keeping their home free of viruses is vital, so visitors are asked not to call if if they have a cold.

“People come up to wish her well and I do say please don't touch her. The boys know the first thing when they get home is to sterilise hands at the front door. Nobody if they think they have a cold, comes into the house,” Rose said.

“Her immune system is so low, I don't think Mary will be going to playschool, my job is to prevent seizures and I don't want to put her at risk. I hope the older she gets the hardier she gets,” she said.

Her brothers give her lots of playtime and social fun though.

“They love her to bits, they have really brought her on,” Rose said.

Mary-Claire turned two in April and despite the many seizures, is miraculously not brain damaged.

Her parents went to Glasgow and Holland for second opinions and doctors are awed at her resilience.

The Dutch doctor they saw recommended medicinal cannabis as a rescue med, but on return home, they were disappointed at the Irish doctor' responses.

“The door was shut, they can't even discuss it here,” said Rose.

Rose is now getting texts from other families in the same boat sharing words of support, as well as from many well wishers.

“It's fantastic, they are wishing Mary well, telling us to stay strong, it means the world to me,” she said.

Read also: '!'ll have to get arrested' warns dad