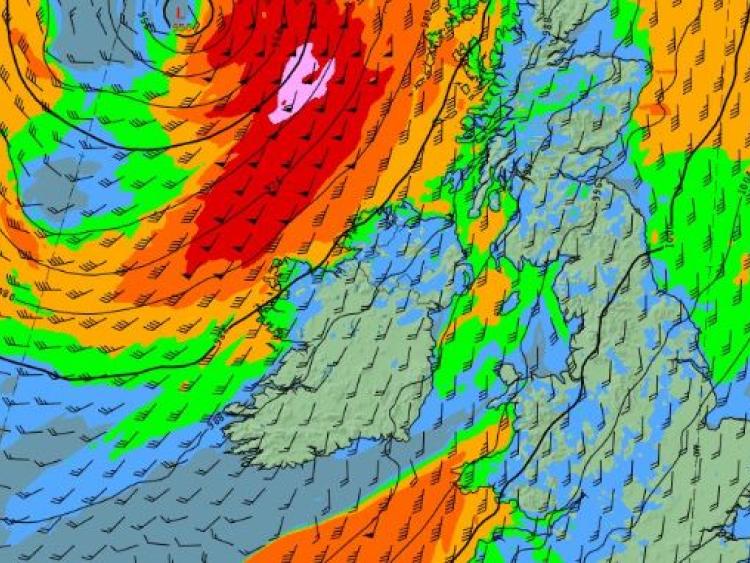 Storm Callum lashed Ireland with winds of up over 120kmh last night and there are fears that similar conditions are on the way for the weekend.

Commuters faced delays across the country and 30,000 people are without power so far due to damaged power lines.

Homes and businesses in Naas, Newbridge and Kilcullen Co Kildare are among those inland that were hit with power outages as well as Talbots Inch, Rosehill, Paulstown and Goresbridge in Co Kilkenny.

We have an extremely large fault in the #Knocktopher, #Paulstown, #Kilkenny areas of #Co Kilkenny , apologies for the inconvenience. Updates available on https://t.co/VMtxFsdIxw

Met Éireann has issued an updated Status Orange wind warning for Donegal, Galway, Mayo and Sligo until 16:00 on Friday.

The highest gust so far is 124 kph in Belmullet at 7am Friday, October 12. Moore Park County Cork recorded 20.6mm rainfall in just a 4 hour window overnight.

All other warnings across the country have been lifted but the Met Éireann forecasters have said the stormy weather isn’t over yet.

“Further warnings were considered across parts of the south and east later Friday, owing to another swathe of wind and rain. However the severity and likelihood of this secondary event has diminished considerably.

“This event continues to be predominantly a coastal one, though some severe gusts moved inland, especially close to the squally cold front, as it pushed up over the country overnight.  Gusts in excess of 90 km/h were recorded widely, with up to 125 km/h gusts in parts of the west.

“Some further severe gusts are yet expected, with the the severe ORANGE warning still in operation for west and northwest coastal counties.  Gusts of 100 to 130 km/h are forecast across each county, with the strongest coasts along exposed coasts,” forecasters said.

ESB's Senior Press Officer Paul Hand said thousands of homes and businesses are without power due to damage to power lines.

Speaking to RTE Radio One's Morning Ireland, he said they anticipate the number of power outages to increase as the storm moves northwards.

The National Emergency Co-ordination Group met yesterday for a briefing on Storm Callum. The group is due to meet again on Friday morning to access the damage.

There are currently no reports of power outages or trees down in Laois. If you have an update get in touch news@leinsterexpress.ie or on our social media.

8am : Due to #StormCallum we have 30K customers without power this morning, mainly in the Southwest, we apologise for this interruption. We are currently evaluating all faults and https://t.co/cwxXH3FsWc will be updated with restoration times ASAP pic.twitter.com/BpXbxKbL2X

The latest satellite image shows how big #StormCallum is. It's going to be a wet and windy day for many places ️ pic.twitter.com/kYgQZLCTYo

#StormCallum Record of winds measured at our station in Belmullet, Co. Mayo showing a gust of 67 knots (124 km/h) this morning at about 07:20 (timeline on image is UTC) pic.twitter.com/Uz1jNhzHjW

Hopefully the storm has passed you without harm. The swell is high, please be careful if you are close to exposed coastlines, #stormcalum may have moved off but these seas are wild. #hooklighthouse #StormCallum pic.twitter.com/i3dHsNtKoJ