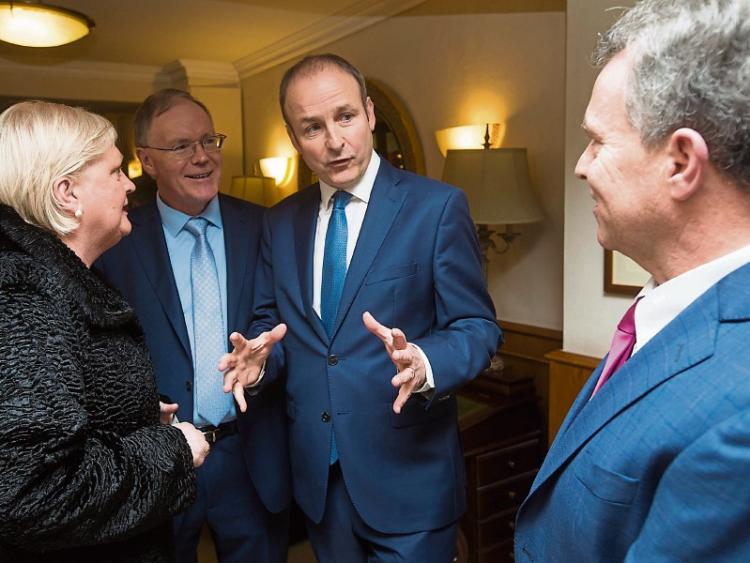 Micheál Martin with Sean Fleming and other Fianna Fáil members in Laois.

Leo Varadkar is to blame for the Government's instability according to Laois Fianna Fáil TD Sean Fleming who believes a General Election will take place by March 2019 but the Government  could collapse sooner if the Taoiseach does not improve his people management.

The Chairman of the Dáil Public Accounts Committee does not believe that his party will cause an election. He said it will come about as a result of Fine Gael running out of numbers. He described as "very sensible" his party leader's letter to the Taoiseach asking that both parties agree not to collapse the Government.

He said the Confidence and Supply agreement must be reviewed and when complete there can be talks about a possible extension. He said Fianna Fáil needs a scorecard on what has been achieved through the 2016 agreement.

However, he believes an election was on the cards.

Dep Fleming said the Presidential election should take place without the complication of a General Election. He said important Brexit talks must take place in November and other legislation such as the finance and social welfare bill should also be passed by year's end.

However, he said the resignation of Denis Naughten means Fine Gael are now short on numbers. He believes the situation has come to this point because of the Taoiseach.

"He needs, something he has never used in his life before, a bit of people management. He shouldn't have all these people walking off the pitch...The Government has been undermined by its own internal actions. A Taoiseach who is good at people management could have dealt with these issues before he landed himself in a situation where he hasn't got the numbers to uphold the confidence and supply agreement," he said.

Dep Fleming said there have been other Government rows and departures that could have been avoided. He said the agreement with Fianna Fáil depends on whether Mr Varadkar has numbers to control the Dáil with Fianna Fáil abstaining.

"If he continues to lose people who he needs to keep the Government in power it will happen faster than expected. It is totally up to him," he said.

The Laois TD said his party would not precipitate a collapse 'immediately' as his party was committed to the end of the year because the Finance Bill would take until Christmas to get through the Dáil.

As for the rank and file, Dep Fleming said he had been in touch with Laois members and the message is clear.

"A lot are saying it is time to pull out. A smaller number are saying stay in. A lot of members are more in favour of pulling out than staying in and that is very important," he said.

Dep Fleming said it would be harder to read what Fianna Fáil voters want. As to the possibility of a coalition with Fine Gael after a General Election, the Laois TD said that would be a matter for the electorate.

Deputy Fleming was speaking ahead of the Laois Fianna Fáil selection convention for the Laois Offaly General Election candidate convention.