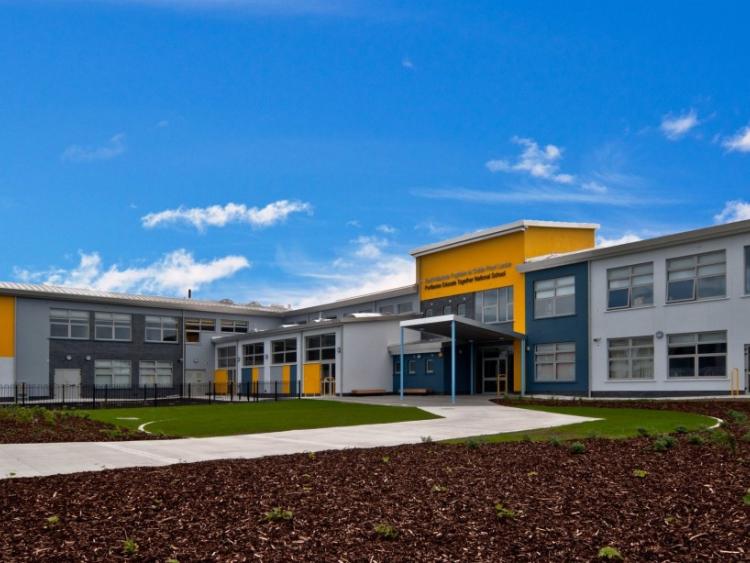 Portlaoise Educate Together NS, one of four in Laois built by Western Building Services.

Protective measures, including an exclusion zone, have to be implemented at a Portlaoise school caught up in the Western Building Systems controversy in an effort to allow the school open after the mid-term break.

"On Saturday (October 27) an initial structural assessment was carried out on our school. Arising from the engineer's report, further investigation is required on the building in the days ahead.

"From tomorrow, (Wednesday) contractors will install temporary protective measures to ensure the safety of our children, staff and visitors. These include a perimeter fence (exclusion zone) around the building and protective walkways at school entry and exit doors.

"Although we expect to open Monday, we await official confirmation from the Department on this and will be in contact with you in due course," said the statement to parents.

Educate Together, which as 320 pupils enroled, is located on the same campus as Gaelscoil Phortlaoise and Maryborough National School. The school buildings opened in 2013.

Educate Together was subsequently extended to accommodate a new ASD Unit. It is not clear what impact the works needed will impact on this unit.

It has yet to be confirmed what steps will have to be taken at the other school buildings which were also subject to structural inspections after being built by Western Building Systems in a bundle of schools.

The contract to build the three schools was reportedly worth €8 million to Western under the Department of Education and Skills’ Framework for Rapid Build Schools.

When it won the contract it in 2012 it was claimed the entire campus would be delivered within a 36-week programme – ahead of the new school year in September 2013.

Commenting on the contract win, Western chief executive Martin McCloskey said: "It is clear that we are delivering what schools need – functional, solid and inspirational buildings delivered within tight timescales and budgets and with minimal disruption to the pupils and staff.”

The company also delivered new buildings ahead of schedule in 2012 for Presentation Convent Primary School Portarlington, the fourth and biggest Laois School on the list of more than 40 schools which may have structural defects.

The condition of the school which serves children from Laois and Offaly has yet to be clarified.

In a statement issued earlier on Tuesday, the Department of Education said arrangements were in place with a contractor to mobilise in the event of internal and/or external interventions being required in other schools following the completion of structural assessments.

It said the initial site-based structural assessments are on course to be completed by Tuesday evening, with detailed analysis by engineers and Department officials, and any necessary follow up examinations, to continue into Wednesday.

Speaking from the Department’s Planning and Building Division in Tullamore, the Minister said:

“I am pleased with the progress being made on the programme of initial assessments. I appreciate that parents, pupils and staff are keen to hear results from inspections at schools and the Department is confident that once the further analysis is carried out by engineers and consultants we will be in a position to confirm decisions in the next day or two,” he said.