Image of precautionary steps to be taken at schools.

The Department of Education cannot put a timeframe on how long scaffolding, fencing and other safety measures will be in place at three schools in Laois which eduate nearly 1,500 boys and girls.

A question and answer information sheet sent to schools in Portlaoise and Portarlington and 19 others around the country, seen by the Leinster Express, outlines the temporary measures that must be taken and why. It also gives an indication as to what happens next.

Work is underway this weekend at Gaelscoil Phortlaoise, Educate Together NS Portlaoise and Presentation Primary School Portarlington to ensure they open after the mid-term break. Other nearby schools impacted include Scoil Phadraig Naofa Athy, Athy Model School and Gaelscoil Átha Í. All the schools were built by Western Building Systems under a rapid build scheme.

In its circular, the Department says it is the intention to have precautionary measures implemented by Sunday, November 4 to enable safe occupancy from November 5. The Department describes this as a 'challenging timeframe' and will remain in close contact with principals.

External measures include high steel mesh 'heras-type' fencing, decked canopies supported by scaffolding above doorways. The fencing is erected at a distance from the school walls that is equal to or greater than the height of the building. Drawings of the measures were included in the circular.

Measures are outlined where internal issues have been identified but the Laois schools do not fall into this category.

Before the schools can be occupied the Department says the "written confirmation that works have been carried out to the required standard will be provided to the school authorities".

"The Department will also provide written confirmation to the school authorities that it is satisfied that the building can be occupied on the basis of the above professional confirmations," said the circular.

As to why the precautions have been taken, the Department says sample openings in school structures revealed inadequacies.

"From the sample opening works, there appears to be the insufficient or inadequate installation of, wall ties in the external wall cavity. This indicates a potential issue with the external wall, but the nature and extent of this issue can only be confirmed by further investigation," says the document.

The Department does not have a timeframe for repairs.

"As to the next phase of the process, the Department will undertake further investigations and implement any necessary permanent remedial measures at schools.

"While we will endeavour to keep the duration to a minimum, it is not possible at this stage to confirm exactly how long precautionary measures will be in place.

The Department says safety is the reason for the steps taken.

"We acknowledge the negative impact that some of the external measures, in particular, will have on the appearance of school buildings and, in some cases, on the play space available. However, the decision to implement such measures has been take in the interest of ensuring the safety of all those who use the school building," it says.

The Department says one structural engineering firm conducted the assessment to ensure a consistent approach. It said this firm had no role in the original design or construction of the buildings.

The circular said detailed survey reports will be finalised following a further phase of investigation and remedial works.

The Q&A was issued following queries from principals, boards of management and parents.

The Laois Offaly Presentation Primary School Portarlington has 741 pupils mainly girls. The part of the school which accomodates junior infants and children with autism was built by Western Building Systems. The Nano Nagle hall is also part of an extension opened in 2012.

Image below of work needed to allow schools to open. 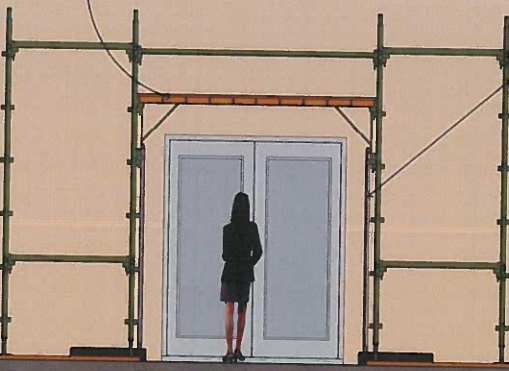