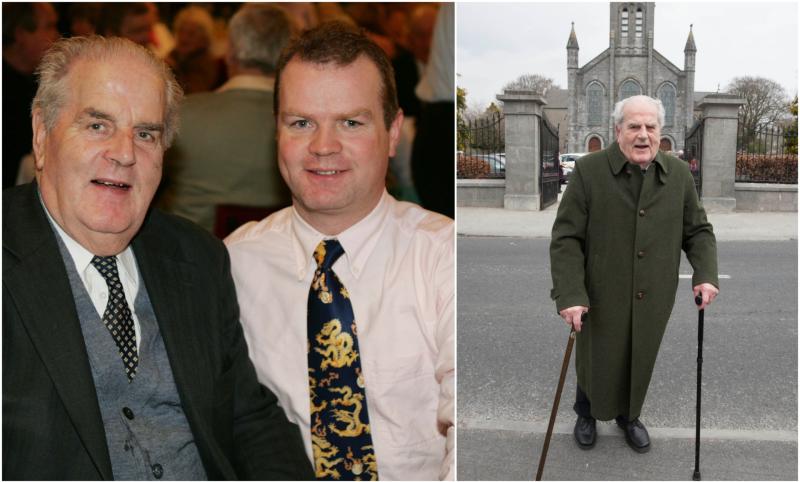 Joe Murphy seeing them off at the Mac Giolla Phádraig Way Walk on Easter Sunday 2013 from Durrow. Picture: Alf Harvey

There is sadness in Durrow and beyond today at the death of a well-known businessman in the area Joseph (Joe) Murphy.

The death took place on Monday, November 12 of Joseph Murphy in his 95th year, formerly the Castle Arms Hotel, Durrow. He was surrounded by his loving wife and family.

Martin Lawlor of Lawlor's Florist in Durrow has paid a glowing tribute to the late Mr Murphy.

"Joe Murphy is to Durrow what Saint Patrick is to Ireland. He put Durrow on the map in the 60’s when every other town was passed by.

"He brought thousands of people young and old to the Castle Arms Hotel, he had a farm and stud farm too which all gave great employment. Every school leaver in Durrow and surrounding areas worked for him at some stage.

"On All-Ireland semi-final and final days, bus loads of people travelling from Cork or Kerry were pulling into Durrow for their breakfast and pulling in again for dinner on their way home.

"No matter what you wanted if you asked Joe had he got it, once you asked, he would give you the sun moon and stars.

"He was involved in every organisation in Durrow, he was and is Mr Durrow.

"If you went anywhere in Ireland he was a household name, a fantastic personality that rubbed off on everybody. He had a great affinity for children and always made sure they were looked after at any weddings or events.

"What he has done for Durrow is unbelievable, he is the voice of Durrow all over Ireland, he brought people here and a good percentage of people in Durrow have worked in the Castle Arms Hotel and their children work there now. I shed a tear for Joe, he was a gentleman and he reared an exceptional family all with the great Murphy ability.

Reposing at his residence on Wednesday, 14th November, from 2pm with Rosary at 9pm. Removal Thursday, 15th November, at 7pm arriving at the Church of the Holy Trinity, Durrow for 7.30pm. Requiem Mass on Friday at 11am with burial immediately afterwards in adjoining cemetery.