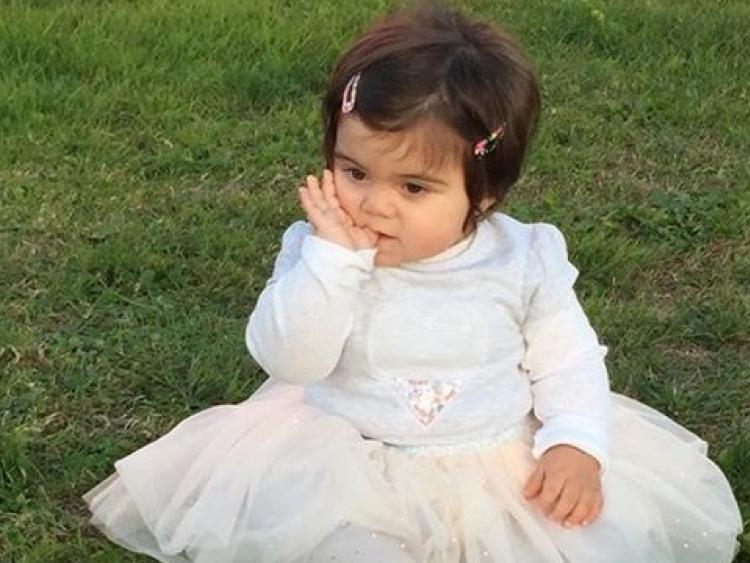 Fundraising efforts are underway for 14-month-old Amira Rauf from Carlow who has been left paralyzed from her chest down and is currently in an induced coma after a car accident earlier this month.

The crash occurred on November 6 on the N80 Portlaoise to Carlow road close to Simmon's Mill Cross between Stradbally and Arles when a man in his 40s was fatally injured after he crashed into another car being driven by Caroline O'Toole Rauf, Amira's mother.

Amira sustained critical and serious injuries and was non-responsive from the scene of the accident until she got to Portlaoise hospital where they worked on her and brought her back around.

The toddler was then transported to Temple Street Children's Hospital and doesn't have the use of her abdomen which means if she does come out of sedation and the induced coma; she will have to learn how to breathe through her diaphragm.

Donna Purcell, a best friend of Caroline, said the mother-of-two sustained a lot of bruising from "head to toe", her chest was impacted as well as her hip.

Caroline is now going between a wheelchair and crutches and discharged herself out of the hospital because she was in Portlaoise and needed to be in Temple Street with her daughter.

Both Caroline and her husband, Adnan, have been at their daughter's bedside since the accident.

Amira has suffered two cardiac arrests, both her lungs collapsed and the right lung has since been inflated. The main concern at the minute for the 14-month-old is making sure that she's able to breathe on her own.

Donna said: "If she's unable to breathe on her own, they are looking into getting her to a specialist unit in Stockholm."

The couple also has a seven-year-old son. Caroline was heading to Portlaoise to a hospital appointment for Amira when the accident occurred.

A GoFundMePage has now been set up to raise funds to help the family get through this "horrific time and get her the best treatment possible and help cover medical costs".

The page states: "My Name is Donna Purcell, my dearest and closest friend Caroline O'Toole Rauf was in a serious car accident on Tuesday, November 6 with her beautiful 14-month-old daughter Princess Amira.

"Amira is currently fighting for her Life in Temple Street Hospital she is currently critical and is on life support.

"Amira sustained life-threatening injuries and is paralyzed from her chest down.

"Princess Amira is fighting for her life and I would really appreciate any help in raising funds to help her family get through this horrific time and get her the best treatment possible and help cover medical costs.

"Please help me help this little Princess, she deserves the world."