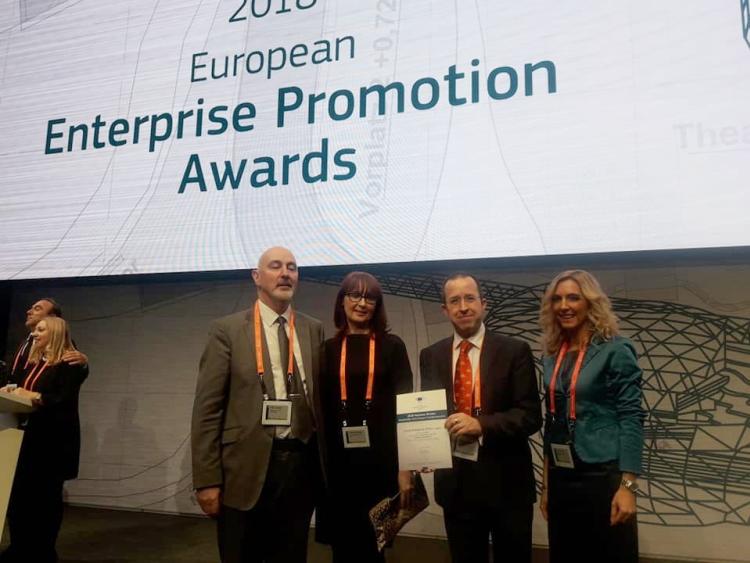 The Laois Local Enterprise Office has been announced as category runners-up in the finals of the European Commission's European Enterprise Promotion Awards.

One of the projects nominated by Ireland this year was the Laois Start Your Own Business programme delivered by LEO Laois which was successful in the "Responsible and Inclusive Entrepreneurship" category.

Local Enterprise Office Laois have taken an innovative approach to engage with marginalised groups over the past two years by adopting mainstream Start Your Own Business programmes to meet their identified needs.

We are proud to be runners up in our category in the 2018 @EEPA_EU #EEPA2018 #MakingItHappen pic.twitter.com/IgiBQFoIvF

This is the first time ever that a Local Enterprise Office has been chosen to represent Ireland at the finals of this prestigious European final which adds to the scale of Laois's success. The awards ceremony was held in Graz, Austria on Tuesday, November 20.

Delighted to announce we are 1st @Loc_Enterprise Office ever nominated to represent #Ireland in the final of the @EuropeanCommiss 's prestigious @EEPA_EU Awards. Final to be held in Graz Austria in November as part of @EuropeanSMEWeek #Laois #PromotingEnterprise https://t.co/bpZT4mm81a

Evelyn Reddin said this award is a huge achievement they are proud of.

"We were deeply honoured to be the first Local Enterprise Office ever selected to represent Ireland at the European Enterprise Promotion Awards.

"Then to be selected by the European Commission tonight as the runners-up in our category is a huge achievement and one we will be very proud of.

The European Enterprise Promotion Awards recognise outstanding projects from across Europe which work to support entrepreneurs and small businesses in six different categories.

Each country in the European Union, as well as Turkey, Iceland and Serbia, can nominate a maximum of two projects to the European Enterprise Promotion Awards final.

The finals of the European Enterprise Promotion Awards are organised on an annual basis by the European Commission as the centrepiece of European SME Week.

The finals are traditionally held in the country which holds the Presidency of the European Council at that time, in this case Austria.

Spotted some familiar faces in Graz at a policy workshop on the final day of the European #SMEAssembly2018 pic.twitter.com/AghylSf5wV