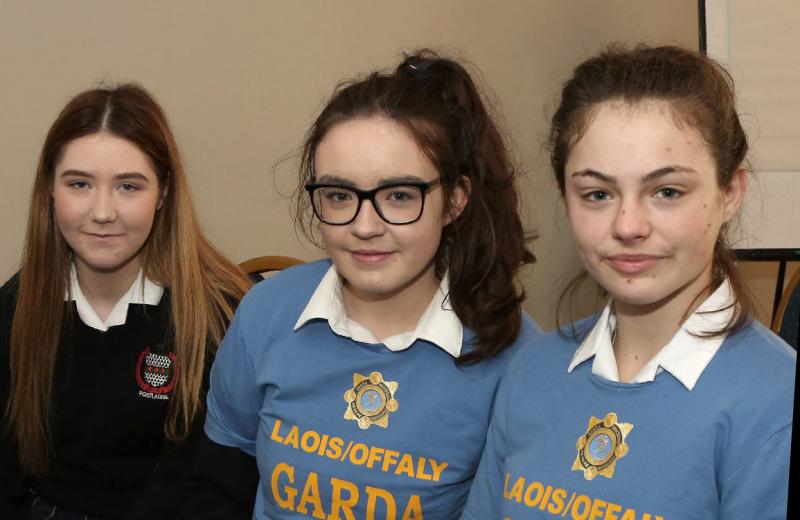 Young people in Laois and Offaly will have the opportunity to be acknowledged for their positive impact and work in communities in the first ever Laois Offaly Garda Youth Awards.

The awards celebrate outstanding young people between the ages of 13 and 21. Laois Offaly Gardaí recognise that a lot of good work is being done by young people in every community throughout both counties, which should be awarded.

The nominations are now open for young people, both individuals and groups, to be put forward by any adults from youth groups to community groups or schools.

There will be twelve awards given out in February 2019 at a ceremony in Portlaoise, four of these will go on to the National Garda Youth Awards and the other eight will be local prizes.

The gardai are looking to reward young people in communities who have overcome adversities, done outstanding work and stepped into leading roles.

The Laois Offaly Garda Youth Awards were launched at the Killeshin Hotel in Portlaoise on Friday, November 30.
Laois Offaly Garda Chief Superintendent John Scanlon said they want to unearth the untold stories of the good work young people are doing.

“It’s important that in society we do what I call succession planning, that young people start to engage with the idea of what contribution you are going to make and some of you are ahead of the curve, some young people in our society have done enormous things, made enormous contributions, some of them are untold stories and we want to give that forum to those young people that their stories can be told.

“A young person that simply looks after some other sibling in the family because they are not well, they have taken up a role because elements of their family have passed away, that they step into a community and lead on some aspect of something that ordinarily would not normally fall to a young person, it is to the limits of their imagination.

“I would suggest that the person who receives an award would never have set out to win it, unlike the Gaisce awards where they set out and they plan to do it whereas in this there must be some gems of examples out there. It can be simple, it can be anything. That some other person in the committee says isn't it amazing what that young person is doing and take the moment to write out the nomination,” he said.

The awards are sponsored by Supermac’s and well-known owner of the fast-food chain, Pat McDonagh attended the launch at the Killeshin Hotel which he also owns.

“I think it will be a huge benefit to all concerned, there is a lot of good young people, they are very tech savvy, conscientious, they are socially minded and a lot of them are doing a lot of good work out there and not getting too much recognition.

“Young people are under serious pressure in relation to the drug scene which is spreading pretty rapidly around the country or whether it is alcohol as well or whatever else, compared to back in the day there is much more of a push on young people also there is peer pressure from their friends as well whether it is socially or otherwise, it is a challenging time.

“We as parents have created this situation so it is up to us to try and guide them and this initiative is very worthwhile in that account,” he said.

Nominations are open and entry forms can be collected from your local Garda Station, or downloaded from the Laois Offaly Garda Division Facebook Page or on the Garda website. The award winners will be celebrated at a special event at the Killeshin Hotel, Portlaoise on Friday 22nd February 2019.

A group of students from Scoil Chriost Ri who attended the Laois Offaly Garda Youth Awards launch said the only reason they have been able to get involved with their community is because they are in Transition Year (TY).

Three TY students, Ava Graham, Rhianna O’Reilly, Grace Tyrell spoke to the Leinster Express about the Garda Youth Awards which they said they have a huge interest in.

“It sounds really good, it sounds like something I would love to be nominated for. It’s really cool to be able to do something like this,” Grace said.

“The school social placement helps when they put us in a charity shop or something like that, that helps a lot, if you weren’t in TY you wouldn’t have the opportunity,” Grace explained.

Rihanna O’ Reilly said they had been inspired by the launch of the awards to continue fundraising within their youth group, the No Name Club.

“I was going to talk to them [gardai] about our No Name club, we do it during the week, it’s a community social club it is on every week, outside of school in the youth cafe. We meet up every week and there is lots of stuff at Christmas we are doing a thing where we are all going up to Roll n Bowl and during the year we do different community things and we are starting to plan something now for next year like coffee mornings to raise money and things like that.

“I think it would be good to see if we could do it,” she said.

All three students agreed that the awards inspired them to consider their contribution to society through groups and opportunities like this and that it would be good for young people to be acknowledged for this work that often goes under the radar.