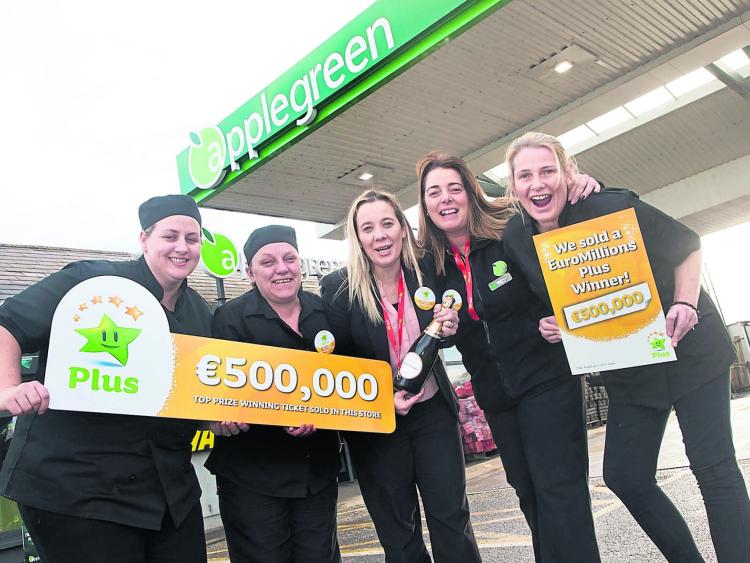 A Laois man was dumbstruck after he discovered he had won the top EuroMillions Plus prize of €500,000 from a ticket sold in a Mountmellick filling station.

There was great excitement in Mountmellick when it was revealed that the half a million euro winning ticket had been sold there almost two weeks ago.

The winner has claimed his prize and said it won’t change him and he will still be the same humble family man he was before.

The man who has chosen to remain anonymous said he was surprised he won because he is not from Mountmellick.

“I was walking around with the ticket in my pocket for more than a week when I heard there was a winning ticket sold in Mountmellick. It still didn’t really twig it could be me as I don’t live there.

"I often stop in the town to fill my car with petrol when I drive by. When I scanned the ticket I got a message to contact the National Lottery.

"When I called and was told I had won a half a million euro I couldn’t utter to the lady on the phone. I wasn’t taking in what she was saying to me. It’s the first time in my life I’ve been utterly speechless," he said.

The winner also said that he has only told his wife about his good fortune and he is thinking of how to break the news to his children over the Christmas break.

“I’ve been humble all my life so there will be no mad spending splurges. This has been a huge slice of luck for us and I’ll use this money to help out my family and it will be a bit of comfort for us all," he said.

This winning ticket was sold at the Petrogas Service Station in Mountmellick town, Co. Laois. It was the 27th Irish EuroMillions Plus top prize of €500,000 win of the year.

The EuroMillions jackpot is soaring towards a whopping €100 million tonight, Friday 21st December.