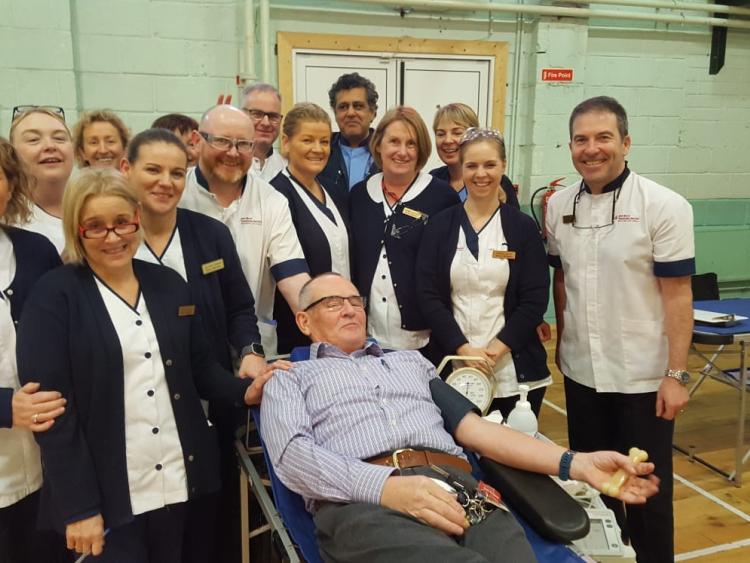 A retired Portlaoise garda has donated blood for the 100th time, reaching a goal that he set for himself when he was 18 years old.

Tim Gleeson, a Nenagh native, who moved to Portlaoise to work for An Garda Síochána in 1975 has saved an estimated 300 lives with his amazing 100 blood donations over 46 years. The Red Cross states that up to three lives can be saved with each donation.

The 64-year-old told the Leinster Express about why he started donating blood regularly.

“It was a goal I set myself when I started donating when I had just turned 18. My father used to go on a regular basis and he said I wouldn’t donate so I had to prove him wrong.

“There is a fear of giving the first donation, I know that fear but I wouldn’t please my father to go home without doing it.

“When I joined the gardai in Templemore I went to the Limerick blood transfusion and if you donated you got the day off so us being young lads did it for the day off.

“I suppose being a guard you would be out at traffic accidents and see the need for it so I got into the habit and never looked back,” he added.

Giving regular blood donations became a routine for Tim three or four times per year and he noted how times have changed since he first started.

“You used to get two bottles of Guinness after every time you donated to replenish the blood, that lasted about 10 or 15 years but they stopped it because of drink driving.

“Nowadays, after you give the donation a few days later you get a text to say where the blood has gone, my iron is higher than normal and sometimes babies need that so I could get a text saying my blood is gone to Crumlin hospital and it gives you a boost,” he said.

Tim said the process is painless and he would love to see more young people donating.

“It is painless, the worst pain is taking the plaster off after a day or two.

“I feel good after it, they say a blood donation saves three lives minimum but only three per cent of the population donate and one in four people will need a blood donation.

“When I go to donate it is often the same faces I see every time. It would be great to see young people taking an interest, no one knows when they might need it.

“You never see a young crowd, I would love to see more people, I’d love if the three per cent of the population donating went up to 10 or 15 per cent for the difference it would make in hospitals.

“The staff are fantastic in the donation centres and it only takes an hour of your time and one form to fill out, and you feel great after it,” he said.

Tim is married to Ann Gleeson and has one daughter, Laura.

He stays fit and healthy walking his dogs daily and cycling up to 300 km a week.
When he retired from An Garda Síochána he drove a bus for the National Learning Network in Portlaoise for 11 years until 2017.

Tim said he will continue to donate blood until they tell him not to come anymore.

MASSIVE Congratulations to Timothy Gleeson who gave his 100th #blooddonation in Portlaoise yesterday! ❤️He's pictured here with the Carlow Mobile team marking his huge achievement, well done from all of us and thanks for helping to #savelives over the years! pic.twitter.com/lz7DdlaAZU